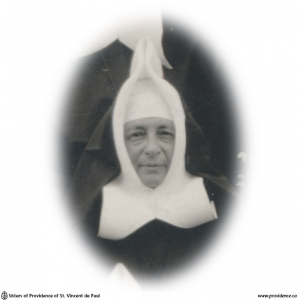 Sister Mary Isidore died at the Marian Infirmary on November 9th, after a prolonged illness. She was the former Eliza Jane Merron, daughter of the late Hugh Merron and Mary Lachapelle of Brockville, Ontario, her birthplace.

She entered the Novitiate at the House of Providence, Kingston, in 1897 and made profession in 1899. During her long religious life she devoted herself to the classroom, teaching in Brockville, Kingston, Perth, Chesterville and Arnprior until she retired in 1934. Sister was noted for her fervour and zeal. “She was dutiful, zealous, industrious and very fond of children.” She loved decorating her classroom, painting cards, etc., and even in her declining years she was always occupied with her favourite hobby, painting, cutting and pasting pictures, etc. – little souvenirs which she took pleasure in giving to Sisters on their feast days. She had a good sense of humour too, and often entertained her companions by telling funny things that happened in the early days.

Sister spent her remaining years at the House of Providence until she moved to the new infirmary here in September. She had been confined to her bed for some time with a fractured hip from which she suffered greatly, as well as from arthritis; and as she was very hard of hearing she was denied much of the pleasure of recreating and praying with her companions in the infirmary.

She celebrated the golden jubilee of her religious profession in 1949, and was very happy and grateful for the privileges she then enjoyed.

His Grace Archbishop O’Sullivan officiated at the funeral Mass. He was assisted by Msgr. Byrne and the clergy from St. Mary’s Cathedral. Burial was in St. Mary’s cemetery.  Rev. R.J. Flurey recited the prayers at the grave.