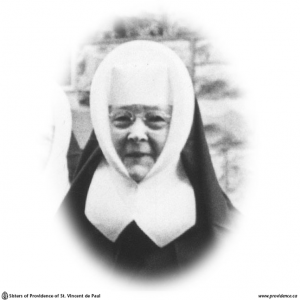 March 29, 1979, two months after the 60th anniversary of her entrance into the Congregation of the Sisters of Providence of St. Vincent de Paul, Sister Mary Ivan was summoned to meet, face to face, her judge, whom she had served as her spouse for over half a century.

Lillian Mabel LeSage was born in Tweed area and baptized a week after her birth in St. Carthagh’s Church by Reverend J. S. Quinn. She was the eldest of eight children (one little girl died in early childhood) born to Mitchell LeSage and Philomena Genore. This solidly Christian family had three of its members called to serve God in religious life – Lillian and Mary as Sisters of Providence, and Simon, as a priest of Kingston Archdiocese from 1924 until his death in 1963.

When Lillian made profession as Sister Mary Ivan in 1921, she was assigned to Providence Hospital, Moose Jaw, to train as a nurse. She remained on the staff there for some years. Later she served at St. Vincent de Paul Hospital, Brockville, and St. Mary’s, Montreal.

She then spent eighteen years in administration; six years as Superior and Administrator of St. Francis Hospital, Smiths Falls, during which term St. Joseph’s wing was added; six years at the Dowd Home, Montreal, and the third six-year term as a member of the General Council at the Motherhouse.

The following comment in the bulletin of St. Patrick’s parish, Montreal, in which parish the original Dowd Home was situated, is a tribute to Sister M. Ivan – a tribute to which every member of her religious congregation would subscribe:

“We wish to offer a word of heartfelt appreciation and thanks to Sister M. Ivan, former Superior of Father Dowd Home and now a member of the General Council of the Sisters of Providence. To the Sisters, as well as the wonderful people who are guests at the Home, Sister M. Ivan was kindness personified. Attentive to the duties of administration, always graciously ready to attend to the wants of everyone in the Home, Sister truly exemplified the divine maxim, “I have come to serve”. We are deeply indebted to Sister M. Ivan and we say, “Thank you for your many kindnesses while in our midst.”

When Sister’s term as General Councillor was completed, she spent two years at St. Mary’s of the Lake Hospital and then her remaining ten years at the Motherhouse. Her years of service had taken their toll, as well as indifferent health over a long period. While a young Sister at Moose Jaw, a serious illness necessitated a year of rest, and for many years she suffered from arthritis. But she continued to serve, using her skill as seamstress to help everywhere a “stitch in time” was needed. And no one ever heard her complain of the pain we knew she was enduring, nor of the result of a not too successful cataract operation which afforded only a limited amount of sight for reading.

In November, 1977, while spending a few days in Tweed, with Sister Mary, she suffered a slight cerebral hemorrhage. After a brief hospitalization, she was admitted to Marian Infirmary. There she maintained the same cheerful disposition, even though we noticed she was becoming weaker. On March 29th, Father Trainor, who offered Mass daily in the Infirmary Chapel, was absent at his sister’s funeral, and Monsignor Buckley, the Community chaplain, distributed Holy Communion to the Infirmary Sisters. Sister M. Ivan walked from her room to the chapel to receive what was to be her last Communion

She ate noon lunch as usual, but a few moments later Sister Margaret Rose, Superior of the Infirmary, looked in and thought her not as well. Sister called the ambulance, which came at once. Meanwhile, Sister M. Delphine, nurse, had been summoned and Sister Muriel, Superior General, and Sister M. Melanie, Counciller. Father D. Clement was also called, but when he reached the room the ambulance had left, with Sister Karen Bennett attending Sister M. Ivan. Father Clement went immediately to the hospital; found Sister had just died, and anointed her.

Only two of the eight members of the immediate LeSage family survive, Sister Mary and Wilfred, both of Tweed; but there are 19 nieces and nephews and 50 grand-nieces and grand-nephews, many of whom attended the funeral.

Many of us, members of the Community, and Sister M. Ivan’s relatives, while feeling keenly her departure, also, felt that this gathering for her funeral Mass was in reality an anticipated celebration of her Diamond Jubilee as a Sister of Providence of St. Vincent de Paul, which was scheduled to be observed on June 16th.