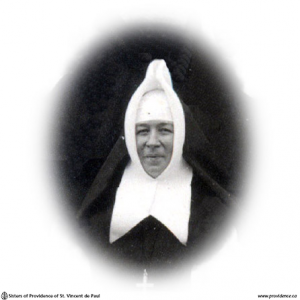 Sister Mary James died December 14th, 1949, in the early hours of the morning at the House of Providence, Kingston. In her last moments she had the privilege of being attended by her sister, Sister M. Edward and other members of the Community.

Sister M. James had suffered much from a stroke for six months previous to her death, and during that time it was her greatest consolation to have her sister with her as frequently as she could be could be spared from her classroom and during the summer vacation.

The former Theresa Quinn, Sister was one of a large family of boys and girls, including Sister M. Edward. She entered the Novitiate, then located at the House of Providence, September 8, 1905. During the years following her religious profession she fulfilled appointments in Smiths Falls, Brockville and Lancaster. She was one of the pioneers of Rosary Hall, our first foundation in Edmonton, Alta. and finally spent her remaining years 1905-1949 in the care of the sick and infirm until her illness, at the House of Providence.

Sister M. James was a faithful religious at all times, devoted to her work in the care of the aged and infirm and made a point of bringing comfort and joy into the lives of others by her cheerful kindness to the poor. May her devoted attention to the sick and afflicted win for her an eternal reward of glory.