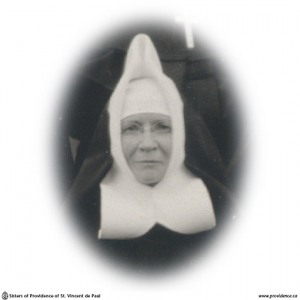 On the feast of her patroness, St. Teresa, a short half-hour before the Pontifical Mass which was offered to mark her Diamond Jubilee of Profession, Margaret Teresa Cleary, in religion Sister Mary James Vincent, was called to her Eternal Jubilee.

The Jubilee Mass for 2 diamonds, 5 golden and 5 silver Jubilations’ had been arranged for October 13th, but Sister M. Amable died on the 10th and her funeral took place on the 13th, so that the Jubilee had to be postponed until the 15th. Sister M. James Vincent was around as usual, but was suffering from a cold. On Saturday morning 13th it was observed that she was quite ill and she was taken to the infirmary. The doctor came and found that she had contracted bronchial pneumonia. Sunday found her weaker, and in the afternoon the chaplain administered the Last Sacraments. She was able to respond to the prayers, and told the Sisters who visited her to enjoy the Jubilee on the following day. On Monday morning she was unable to receive Holy Communion. The priest went into her room and gave her a blessing with the ciborium, she lapsed into unconsciousness and in two hours’ time she had breathed her last. In the Jubilee Mass her name was mentioned in the Memento for the Dead.

In 1893, Margaret Teresa Cleary, a bright young teacher, with three years’ experience, left her home in St. Andrew’s West, Stormont County, Ont., to enter the Novitiate at the House of Providence. After Profession she resumed work in the classroom, and taught in Kingston, Belleville, Perth, Trenton, Prescott and Arnprior. When her years of teaching merited superannuation, she still gave excellent service as Local Superior in Prescott, Lancaster and Glen Nevis and as Sacristan at St. Michael’s Church, Belleville.

In 1948 she retired to the House of Providence, but continued to be active and took delight in helping to care for the infirm Sisters. First Sister Mary Camillus was her special charge; then Sister M. Louis and Sister M. Denis. The last-named Sister was for many years bed-ridden and unable to speak intelligible; Sister never tired of visiting her, feeding her and praying for and with her. During the last years of her life, Sister M. James Vincent suffered the loss of her memory but the habits of a lifetime could not be effaced, and she maintained a shining example for the young. Those who worked with her in the classroom or lived under her guidance in the convent will remember countless little acts of thoughtfulness and consideration for her pupils, her co-labourers and her subjects. The words of the preacher, Father M. Meehan, C.Ss.R., at the Jubilee Mass, could be fitly applied to her:

She “grew old gracefully, her green years changing to silver, gold and diamond of her religious life, her soul sparkling with the diamonds of poverty, shining with the silver sheen of chastity, and glistening with the gold of obedience.”