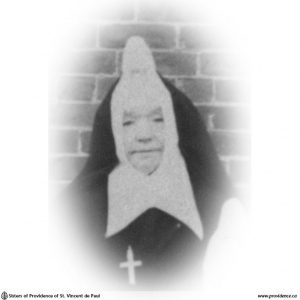 We marvel at what the founders and foundresses of Religious Orders of necessity have passed through and endured. Their lives of devotedness, of generous self-sacrifice are an example, a stimulus to those who come after them.

The subject of this sketch, though not designated as a Foundress, may be considered an outstanding support or pillar to the little Institute, the foundation of which was so well and religiously laid on the memorable day, December 13, 1861. She entered the Community while in its infancy on October 21, 1862, three only having preceded her. She was given No. 4.

Sister was born in Donegal, Ireland January 18, 1833. When but two years old, her parents and family took up residence in Glasgow, Scotland. Brought up and educated in that country she imbibed the Scottish manners and accent.

In speaking with her one would conclude that she was essentially Scotch. What love of God, of His church, of everything religious was implanted in her heart. Then uprightness of mind, soundness of principle, characterized her every action, nothing light or frivolous was ever manifest in her conduct or behaviour.

After her Profession, she was given charge of the few old people. How good she was to them, how interested. She loved the poor. Her life would be spent hereafter directly or indirectly in their happiness. She did much collecting throughout the parishes. What good she accomplished in these visits to the country! Always so charitable and kind, she was a very welcome visitor in those places to which she returned several times.

On two occasions in company with another Sister she made extended trips to the United States. An amusing incident occurred at one of these times. When being permitted to collect in a certain parish in New York City, she accidentally (or otherwise) infringed on another Rev. Rector’s domains. His Reverence, a rather impulsive man, learning of this intrusion, summoned the Sisters to appear before him. They went very meekly to the Presbytery to explain the case and to receive what might be forthcoming. No mistake, they found the Rev. gentleman awaiting their entrance. He appeared very angry, and without listening to their excuse, scolded and resorted to very harsh language, finally threatened to have them arrested and thrown into prison. A moment of silence gave Sister an opportunity to speak, “Dear Father” she said, “I confess, I would not be sorry, I am so very fatigued and my feet so sore, I would not mind resting a while even in prison.” The priest was conquered. He expressed regret for his hastiness, made them consent to be his guests for a while, then allowed them to collect through his parish.

During her life she was a member of the Council of the Community for two terms. In 1887 she was sent on mission to Holyoke, Mass., (the only mission then existing). She was given charge of the laundry and refectory at Mt. St. Vincent. When that mission seceded from the Mother House in 1892, she was among the faithful ones to return to the Mother House.

After getting settled she was appointed to teach Christian doctrine for one hour in the orphan’s class room, to give instructions for one hour each week to the old men and women, and was also given charge of the bags used in collecting, washing and mending these as required. To all of these charges she was most faithful.

Like her illustrious patroness she always had a table or little oratory in her office or room decorated with many pious pictures.

At length her activity was interrupted, she fell, fracturing her hip thereby. After a time she recovered somewhat, so as to be able to go about on crutches, which she did for five or six years. Such an adept did she become in using the crutches that she would go with speed all over the House. She was frequently warned to be more careful. She received many minor injuries, but finally Sunday morning January 18, 1914, while going into the Sacristy to assist at Mass, she fell again breaking her ribs, and shattering her limb so badly that she was ever after completely helpless.

On October 13 of that year the 50th anniversary of her Profession, a day long desired, she was carried to the Chapel and placed before the Sanctuary. His Grace, the Archbishop said Mass for her, also Rev. Father Hanley. She remained for both Masses, then was carried to the Community Room, where she was presented with many little gifts. After seeing some of the inmates she was carried back to her bed as she was getting weak. She was very happy and grateful, having long desired to see this day.

As time went on she felt stronger, and pressed the infirmarian to have her taken to Mass on Sundays. This was accomplished. Two men came every Sunday morning for a couple of years and carried her to the Sacristy. Later she was satisfied to assist at Mass from her bed. On March 27, 1921 she was anointed by Rev. Father Joseph, who died, a couple of days after, while our aged and infirm Sister lived on.

Naturally of a rather hasty and sensitive disposition, how very mild and patient she became.  No murmur or complaint escaped her, though no doubt she suffered much.

It was a pleasure to visit her. She would tell you how very happy she was, how grateful to God for His Goodness. She would often repeat, “Out of Heaven I could not be happier.”

At the opening of one of the annual retreats in March 1923, it was evident that the end was not far distant. The Sisters were in and out of her room frequently praying with her. At length on March 18, 1923 at 2 o’clock in the morning, her spirit took its flight. She slept peacefully away, was conscious almost to the last. A saintly life of 90 years and two months was at an end.