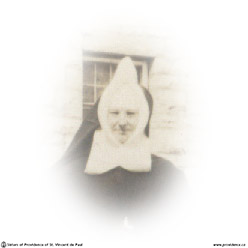 Sister had been in religion ten years only, but in that short time, according to God’s plan, had fulfilled her destiny, and we trust she had merited for herself a glorious reward.

After having graduated from Ottawa Normal School, she was appointed to St. Francis School, Smiths Falls. She was transferred later to Sacred Heart Convent, Arnprior. At the opening of the school term in September 1941, she was unable to return to the classroom, but as her sickness was not considered serious, it was hoped she would be able to return to work later.

Having endured much suffering, for about six months previous to her death, as a patient at the Hotel Dieu and later at St. Francis Hospital, she edified all by her patient endurance and her resignation to god’s holy will. She died in the early morning during the hour of the Convent Mass.