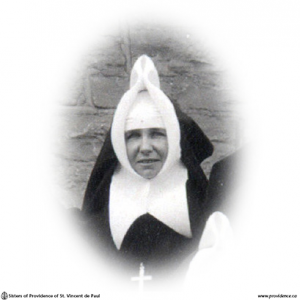 On October 7, the feast of the Holy Rosary, 1919, Marie Prior, the daughter of Timothy Prior and Jane Walsh, left her lovely farm home on Howe Island, her four brothers and her widowed mother to enter the Novitiate of the Sisters of Providence where her maternal aunt, Sister Mary Zita had been a professed religious for almost twenty years.

Having shown before her entrance considerable talent in music as a pupil in the studio at the House of Providence under the direction of that expert teacher, Sister Mary Genevieve, Marie continued her musical education along with her religious studies, and after profession as Sister Mary Jane of Valois in 1921 completed the qualifications for a music teacher. For almost forty years she taught piano and had charge of the church choirs in the parishes of Arnprior, Tweed, Lancaster, Gananoque, and in Batawa where she served also as Local Superior for six years. Her last assignment was in the studio where she had received her own first lessons at the House of Providence. An impaired heart condition against which she had been battling for a number of years forced her to relinquish her teaching duties in June 1966.

After a few weeks in Hotel Dieu she was brought to the Marian Infirmary at the Motherhouse. A pleasant room with a window facing the South, the attention of devoted infirmarians, the daily companionship of her aunt Sister Mary Zita, helped during the long months of fall and winter to ease the distress she so frequently suffered. When she was able she went to the Infirmary oratory for Mass and was privilege to received Holy Communion daily. She was happy to receive from time to time visits from her brothers Teddy and Bernard and their families.

A tonic for Sister Mary Jane during her illness, as it had been throughout her active apostolate, was her keen Irish wit. She was very sick indeed when she could not see and describe the funny side of a situation. But it was the deep faith fostered in a fine Catholic home and developed by a generous religious life that enabled her to fulfill the Will of God in whatever way He chose to show it to her.

On the evening of May 19, she was not as well as usual but when the extra-ordinary Confessor, Father Granville, S.J. came for confessions, she was able to receive the Sacrament. The following day, Saturday, we had Mass at 5 p.m., and the chaplain took Holy Communion to the Infirmary Sisters before Mass. Sister was not able to receive Holy Communion as she was vomiting. During the Mass she suffered a heart attack; the doctor was called and ordered that she be taken to Hotel Dieu Hospital for oxygen. The chaplain had by this time left the house; a priest from St. John’s parish was called to anoint her; he arrived just as she was being taken to the ambulance and gave her the short anointing. She had received the Sacrament of the sick about six weeks before. Mother Mary Alban and Sister M. Edward Joseph accompanied her to the hospital. Doctors and nurses began at once to treat her, but their efforts were of no avail. In less than half an hour she had given up her soul to God.

On Monday, May 22, was observed the Victoria holiday and so many of the Sisters from Belleville, Picton, and Gananoque as well as from the city houses were able to come to view her remains and pray for her.

The funeral was held on Tuesday, May 23. His Grace Archbishop Wilhelm with Monsignor Walsh and Father Wm. Burns concelebrated the Requiem Mass. Two brothers Teddy and Bernard, and two nephews, Colin and Bernard Jr. (all Priors) were pallbearers. The honorary (Sister) pallbearers were three who had made profession with Sister Mary Jane in 1921 – Mother Mary Carthagh, Sister Mary Laurena, and Sister Mary Electa, and Sister Mary Sheila, her companion at the House of Providence Music Studio for the last two years of her religious life.