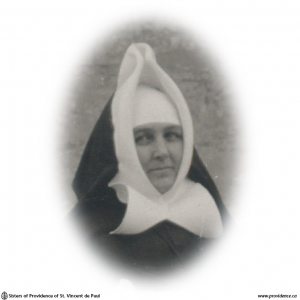 Sister’s life was spent in teaching. She had taught near her own home before entering the Convent. After making religious profession, she was sent as principal to the new mission at Arnprior. Here she resumed her studies for higher education. Three years later, having obtained her degree in Arts, she was appointed principal of the high school in the newly opened mission, Maryvale Abbey, Glen Nevis, a position in which she continued for twenty years. She was then principal of St. Michael’s Academy for a few years.

Characteristic of Sister was her spirit of gentleness, cheerfulness and generosity, which won for her the esteem of her Superiors and the friendship and love of her Sisters.

She had attended the annual retreat and Chapter meeting in July, so the Community was grievously surprised to hear that she had been stricken with a serious illness and was in the hospital. With prayerful anxiety they awaited news of her improvement or recovery, but in vain.  Her time of life was over; her labours at an end.

Sister had spent twenty-nine years in religion. May her soul rest in peace!