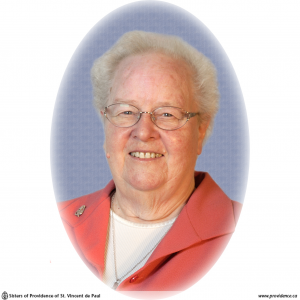 Sister Mary Joan, baptized Marion Doreen LaFleur, was born on August 12, 1930 in Kingston, Ontario, the eldest of four children of Evelyn Wiskin and George LaFleur. She received her elementary education at St. John’s School and her high school at Notre Dame Convent.

She entered the postulancy of the Sisters of Providence of St. Vincent de Paul on March 15, 1948. As a postulant she went to Maryvale Abbey in Glen Nevis to take some high school courses. After her First Profession of Vows she went to St. Michael’s High School in Belleville to complete her high school. After graduating from Toronto Teachers’ College in 1952, she began teaching Grades 3 and 4 at St. Joseph’s School in Kingston. The following year she continued teaching in the primary grades at St. Carthagh’s School in Tweed. In 1955 to 1957 she taught at Sacred Heart School in King City, Ontario. In 1957 she returned to Kingston to teach the junior grades and was assigned as principal of St. Peter’s School. In 1961 she went to St. Michael’s Academy in Belleville to teach Grades 9 and 10. In 1965 she went to Nicholson Catholic College in Belleville teaching Grades 9 – 13 Religion, Latin, Science, Geography and History as well as being vice-principal. She then took a sabbatical year in 1975 -76 and enrolled in the CREDO program at Gonzaga University in Spokane, Washington. In 1978 she became principal of Nicholson Catholic College remaining in this position until her retirement in 1993, the year in which she was the recipient of the Sir MacKenzie Bowell Award for Educator of the Year. In 1992 she received the Canada 125th Medal for her contributions to the City of Belleville. In 2001 she was the recipient of the Pro Ecclesia et Pontifice Medal.

Sister Mary Joan received her B.A. from Queen’s University in 1967, and an Honour Specialist in Geography in 1975. She also took the Principals’ Course and received Ministry of Education certificates in Guidance and Religious Education Specialist. She did postgraduate studies at the University of Edinburgh, Boston College, St. Paul’s University and Gonzaga University.

In her retirement, Sister Mary Joan continued to be involved in Congregational and diocesan committees. She was a member of the re-organization group for the restructuring of the Congregational Vocation Committee and served on the Providence Continuing Care Centre Board. She served on the Diocesan Liturgical Commission, the Finance Committee, the History Update Committee and the Visioning and Planning Committee for the Archdiocese. As well she was involved in the Association of Roman Catholic Chaplains. Sister was a member of the Nicholson Catholic College Corporation Board, a member of the Newman Board of Trustees and the Roman Catholic Representative to the Board of Management of Queen’s Theological College. She was also the first Sister of Providence to be elected to the Queen’s University Council.

Sister Mary Joan was called home peacefully to her loving God on December 5th. The Mass of Christian Burial, held in the Chapel of Mary, Mother of Compassion, Providence Motherhouse on December 11, 2014 was presided over by Most Rev. Brendan O’Brien accompanied by other members of the clergy. Reverend John Brennan, a former student, delivered the homily.