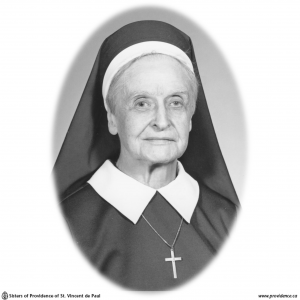 Mary Bernice Gabourie, one of nine children of Lillian Agnes Beausoleil and James Gabourie, was born in Tweed, Ontario, on April 16, 1901.

Prior to her entering the Novitiate of the Sisters of Providence in Kingston on January 6, 1919, Mary Bernice, having completed Junior High School, worked at the Bank of Montreal in Tweed. Because she studied music as a child, she was sent to teach music after her Profession on January 8, 1921, at which she took the name of Sister M. Joan of Arc, and she and Sister M. Gerard taught music within ear shot of each other; she had lessons in counterpoint but much of the theory she taught herself from books. She gradually earned her Registered Music Teacher Certificate and Intermediate Vocal Certificate; she took courses in Associate Piano and Theory from the New York School of Liturgical Music, Father Ronon Choir School and the Department of Education Vocal Type “B”.

Sister Joan of Arc taught music for 65 years in many of our eastern missions and acted as organist in many of the parishes. She was a very successful music teacher and her pupils did very well; she was also very successful training children’s choirs and was considered outstanding in the musical field.

Sister was a very colourful and remarkable person. When her memory began to fail her, she had to gradually give up more land more of her piano students, until finally she was forced to retire. For a while she went to the Day Care Program at Providence Manor each day, but when she returned home and saw the name of another music teacher on her studio door, she would be agitated and wanted an explanation. One of her favourite prayers to console her during such times was:

“My Jesus, I ask you to bless the new music teacher. May she be able to serve you as long and as well as I did.

Now that I am retired, I thank you that I am well enough to be up and around. I am happy to have lots of time to pray for my family, friends and all the Sisters. Help me to pass each day happily doing what I am asked for love of you.

Mary, my mother, I confide myself to your care. Help me not to be anxious about anything. Let me be a sign of peace and joy for all.”

Sister Mary Joan of Arc suffered much during the last months of her life but she remained peaceful with a smile for everyone. She died on November 27 in the 71st year of her religious life. Archbishop F.J. Spence, assisted by several priests, presided at the Funeral Mass and the homily was delivered by Rev. J. Rozon.