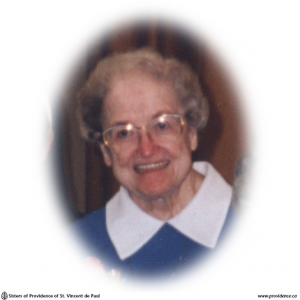 Amelia Voytechek was born on Easter Sunday, April 23, 1916 in Mountain Park, AB. Her parents Michael and Anna Mariska (Dlugos) had emigrated from Czechoslovakia at the turn of the century and settled in Chicago, Illinois. Later, they moved to Micelle BC in Canada and then moved on to Ghost Pine Creek near Trochu AB where Amelia’s father farmed for some time. In 1913 the family moved to Mountain Park where Mr. Voytechek gained employment as a coal miner. The family members endured many hardships but they also spoke fondly of the beauty of this mountain meadow. They were blessed with the ability to look beyond the struggles of daily life to see the splendour spread around them including the spectacular Northern Lights.

Sister had an older brother, Louis who died in 1959 and two older sisters, Annie and Mary, who died in 1950 and 1986, respectively. She is survived by her sister Cecilia (Dmytryshyn) and by her brother, Joseph, both of whom live in Alberta.

Amelia and her siblings grew up to the howl of coyotes, the hoot of owls and the song of bluebirds. They recalled fishing trips up into the mountains with their father, of nights sleeping under the stars covered only by their jackets, and of carrying home the precious trout wrapped in wet leaves in wicker baskets. Mountain goats and bears were part of their lives. As daring youngsters they would run after the coyotes, imitate their howls and then run like lightening when a coyote would chase them, all much to the dismay of their parents. During these happy childhood years the only access to Mountain Park was via the “Blue Flea”, a train that ran from Edmonton through Edson and Cademon. This train was eagerly awaited, as it brought with it flour and other food stuffs to the isolated town. Their meat was obtained from hunting deer and rabbit. Winters were harsh, dark and very cold. The coal mines that provided employment to the town were dangerous and resulted in illness and early death among the miners. However, family life and the bonding among the neighbours was precious.

Amelia left Mountain Lake in the early thirties to attend Business College in Edmonton. She graduated from this two-year program with honours in one year. During this time Amelia boarded at Rosary Hall where she came to know the Sisters of Providence. It was from Rosary Hall in 1935 that Amelia left to enter the Novitiate in Kingston, Ontario. Fifty-one years later she was to return to Rosary Hall as its administrator. In his letter of reference to Mother M. Ursula the chaplain of Rosary Hall wrote that Amelia was a pious and pure soul who assisted daily at Mass and spent considerable time in adoration before the Blessed Sacrament. He remarked on her pleasant disposition, her above average intelligence and her devotion to the rosary.

Following her profession of vows in 1937, Sister Mary Joanna, as she was now known, worked for a year in the office of St. Vincent de Paul Hospital, Brockville. In 1938 Sister returned to the West where she served in the business office of several of the congregation’s health care institutions over the years. Sister’s gentle, peaceful smile brought joy to many sick and elderly patients. An excellent typist and bookkeeper, Sister M. Joanna was always ready to devote her shills to any task at hand. Her life exemplified the wonderful virtue of simplicity. Her needs were few. She traveled little. Her special interests were, people first and then nature. Even when disabled Sister still loved to watch the sparrows and robins flit about, and to care for the flowers. When well enough she enjoyed reading the newspaper, doing embroidery work, listening to music and writing letters to her family and friends. She was an ardent Edmonton Oilers fan.

All those who were privileged to live with Sister Mary Joanna over the years spoke of her as being prayerful, patient, kind, generous and graciously hospitable to all. It was said that no one ever heard Sister Mary Joanna speak an uncharitable work in her entire life. Many hours in the chapel communing with her God gave Sister Mary Joanna a serenity and calm that made others fee at peace in her presence. Disturbed residents at Rosary Hall were drawn to Sister. One in particular used the endearing term “Mama” when addressing her. If this caused any embarrassment to Sister, she never let it be known. Her love for the most difficult residents, as for everyone else, was unconditional.

By 1993 Sister’s health began to fail but she continued to do volunteer service, until in 1998 a major illness resulted in her being admitted to St. Joseph’s Hospital, where she remained until she breathed her last in the arms of her sister, Cecilia and three Sisters of Providence. Two of her nieces who were present joined them in singing hymns and praying until Joanna just gently went home to our Provident God. One of the Sisters who had the privilege of being at her bedside said that she experienced this “holy moment like a whisper of god passing by.”

Sister’s funeral was held in the Cathedral in Edmonton with her good friend, Monsignor William Irwin celebrating the Mass of Christian Burial. In his homily Monsignor spoke of Sister’s compassion and of her dedication to her family and to her congregation. It was appropriate that one of the hymns sung at this celebration of Sister’s life was “Make Me a Channel of Your Peace” because that is what Sister Mary Joanna was to all who knew her. She was buried beside Sister Mary Patrick in St. Joachim’s Cemetery in a beautiful natural setting under the trees. May this faithful servant who served with compassion and trusted in Providence rest in peace.