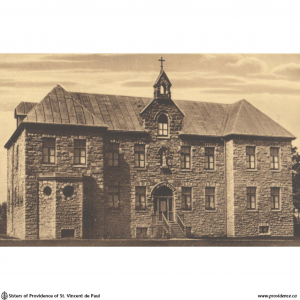 On June 12, 1941, Sister Mary John (Anne Teresa Crowley) passed to her eternal home at the House of Providence, Kingston.

During her many years of religious life Sister was entrusted with some of the most responsible offices of the Institute, at different times. She was local Superior at Chesterville, Arnprior and Gananoque, and for several years acted as General Treasurer and Bursar for the Community. In this capacity she gave evidence of splendid executive ability and a keen sense of duty. Every smallest detail was performed with the same exactitude as the most important ones.

As a member of the Community, Sister was most generous and affable, especially in using her talents for the pleasure and benefit of her companions. So virtually did she comply with the precept of doing good in secret that even her closest friends could not estimate her charity.

Her quiet unassuming manner, and especially her gentleness and patience under the trial of a long period of suffering, have told the story of the gift of her whole self to God. She died on the Feast of Corpus Christi, as if in reward for her marked devotion to the Blessed Sacrament.