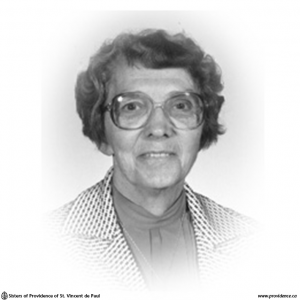 Alice Ann Downey was born on September 19, 1916 in Bainsville, Ontario, the sixth of 11 children born to John Joseph Downey and Mary Catherine Cameron. She grew up in a loving family where she experienced, as expressed in her own words, “God’s unconditional love from her parents”. In this small Ontario community she witnessed people helping each other regardless of race or religion. She developed an appreciation of the beauty of nature and all creation.

Due to circumstances at home Alice was unable to continue her high school education. Later she went to Ottawa to take a course and then took a position with the government. Although she was happy in her work, she yearned for some challenge in her life. Her brother, John, had joined the Air force so she decided to do the same. She was accepted in the Air Force after completing the required tests. However, when she approached her pastor for a required letter of reference, he asked her to reconsider her decision and to pray for guidance. Needless to say, she was very disappointed.

Some time later she made a retreat during which she pondered the thought that God may be calling her to religious life. It was at this time that she decided to join the Sisters of Providence since she was familiar with them. On September 30, 1943 Alice Ann Downey began her novitiate with the Sisters of Providence of St. Vincent de Paul in Kingston. She was surprised to learn that the Mistress of Novices, Sister Margaret MacDonald, was a relative of hers. She recalled that this helped ease the pain of leaving her family. During her novitiate she found peace in spite of some regulations that did not seem to make sense to her.

Following her First Profession in 1945, Sister Mary John was sent to the Father Dowd Home in Montreal to nurse the elderly. In 1948 she was assigned to Maryvale Abbey in Glen Nevis where she was Director of Boarders. After two years she went to the House of Providence, now Providence Manor, in Kingston for a year. From 1951 to 1958 she worked in the offices at Rosary Hall in Toronto and Providence Hospital in Moose Jaw. In 1958 she was sent to Winnipeg as sacristan at St. Joseph’s Vocational School. In 1965 she returned to Rosary Hall in Toronto and then in 1969 she went to Sacred Heart Convent in King, Ontario as Superior. From 1970 to 1976 she served as Superior of the Rosary Halls in Toronto and in Edmonton. In 1976 she went to Providence Convent in Brantford as Superior for one year. Then she returned to St. Joseph’s Vocational School in Winnipeg as Superior and to work in the office. In 1979 she returned to Rosary Hall in Edmonton as Superior. In 1985 she began working in Pastoral Care at St. Anthony’s in Ottawa. The next year she went to Holy Family Hospital in Vancouver to minister in Pastoral Care. During her time in Vancouver, Sister Mary John had a sabbatical year at Manna House of Prayer in Concordia, Kansas. She remained in Vancouver until 2004 when she retired to the Motherhouse.

Sister’s gentle, gracious and loving nature endeared her to all who knew her and made a lasting impression on her many nieces and nephews.

On Sunday, December 2, 2007 Sister Mary John was called home to her loving God. The Mass of Christian Burial, held in the Chapel of Mary Mother of Compassion, Providence Motherhouse on December 5, 2007, was presided over by Most Reverend Brendan M. O’Brien, Archbishop of Kingston. Rev. Msgr. Don Clement delivered the homily. Many of Sister’s nieces, nephews, grandnieces and grandnephews were in attendance.