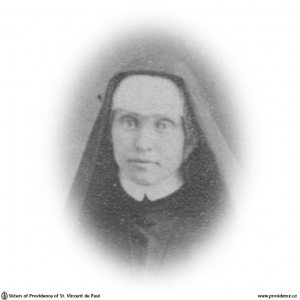 On the 26th of August the chronicles record the death of a member of the Institute, whose career though short, deserves more than passing notice, being full in usefulness and unselfish devotedness.

Sister M. John, known in the world as Ellen O’Donnell, was born in Kingston, of pious and worthy parents on the 1st of December 1847. She was an only daughter, but the liberty usually enjoyed by such favored children seemed not to draw her into vanity or worldliness, for at the age of sixteen years she entered the Novitiate, while the Community was yet in its infancy, being the fifth in rank of those who devoted themselves to the service of the poor, under trying circumstances, for the first members endured hardships and privations to which those who came in later years are utter strangers. We learn however from the testimony of her companions that Sister O’Donnell was no child in courage and earnestness of purpose, for she gave herself cheerfully to the care of the orphan, and other charitable duties of our holy calling, and was admitted to the reception of the Holy Habit, August 15, 1864. She was endowed with a courageous spirit, great energy and strong will power, but her physical constitution was weak, and early in her religious life, the term of her sufferings began, bringing her more than once to the verge of the grave; this delicate health, though developing itself did not interfere with her perseverance in her holy vocation, and she made Profession March 23, 1866. Sister Mary John was deeply imbued with the religious spirit; was faithful in regular observance of the Rule, a devoted child of the Community, a true Sister of Charity and Servant of the Poor. She filled successively the offices of Mistress of Novices and Superior and though her weak health made her duties doubly burdensome, the spirit of sacrifice rendered her forgetful of self and anxious only to advance the interests of her Institute.

Gentle and sensitive in the highest degree, she was capable of most acute mental suffering, but those who knew her best, and have some idea of her heroic struggles, prefer to treasure the living memory of her patient endurance, and pay thereto, the eloquent tribute of a respectful silence, resting as they do, in the sweet assurance that He who notes the sparrows fall, has seen them, to recompense, and glorify His servant. ‘Tis thus she would have it too, and we will respect her wishes and merely detail here such events as will be for those who walked life’s ways with her, a connecting link, if they would recall her history, and review her checkered course, and for the edification of those who have not known her, let it be written that Sister M. John possessed in an eminent degree the spirit of the Institute. Though not naturally of an ardent temperament, she had great sympathy for the poor, and many a deed of charity, known only to the recipient thereof, has been recorded in the “Book of Life” to cancel in part the weakness of human frailty.

By nature, quick to resent, she knew how to bear, how to forgive injuries, and even overcome by kindness those who had wronged her.

Of her silence under the most acute physical suffering what will we say? None who looked on her bright cheerful countenance could suspect that the night had been passed in pain and sleeplessness. Again and again she seemed to be in danger of death; but her recuperative powers were so great, her will and energy so indomitable that on the least favorable turn in her sickness she would rally her little remaining strength and return to duty. It was during her term as Superior, that the mission at Holyoke was founded, and she was closely identified with every enterprise that marked the prosperity of the Community, not only during the term of her administration but throughout her life.

Though weary of suffering she was still anxious to live for the sake of her Community, but medical aid was powerless to arrest the progress of the disease which wasted her strength and preyed upon her vital powers. At length she succumbed, and though every effort was made to save her, the most sanguine could not but see that the end was near. In the month of March 1883, she was again elected to the office of Superior, but did not long bear the burden for on August 26, the same year, death came to her relief, and freed her from temporal cares, responsibilities and sufferings. For many years she was the victim of stomach trouble, and in this enough is said to those who were associated with her, or who know what the disease entails.

She had little to fear in death, for her responsibilities though great, were always conscientiously discharged and though the sisters felt the deepest affliction in her death, they rejoiced in her happy transition to endless peace and joy. She died August 26, 1883 in the thirty-sixth year of her age and the twentieth of her religious life. She who loved us so well, is still permitted to plead our cause and in the holy Communion of Saints to watch over the Community, and nurture in the hearts of her sisters the true spirit of the Institute. May the name and virtues of Mother Mary John ever be held in sacred remembrance and in the Resurrection Day, may we all be again united with her.

Hushed and silent is our cloister
For the angel death is near.
And our loved and cherished Mother
Is forever gone from here!
And the dirge is lowly chanted
Of the Miserere knell.
And amidst the hush of sorrow
List we for the funeral bell.

Now the bell as it is tolling
Lends its message to the heart.
Of the Sisters’ praying, weeping.
She a kindly Mother’s part
Showed to them, to aged and orphan
To the sick, the poor who wail,
For their dear departed Mother
Who has left this earthly vale.

Dear dead lips now sealed forever
Which so often moved in prayer.
Sweet closed eyes that shone so kindly
On all those who felt her care;
Hands that now are calmly folded
In the conqueror death’s embrace,
Tended they so true and faithful
To Christ’s lonely orphan race.

May the pray’rs that are now wafted
To th’ eternal throne above,
Prove fruitful for her welfare
As the measure of our love.
And when free from earthly shackles
And our mortal life is o’er
May our Mother come to greet us
On that happy distant shore.