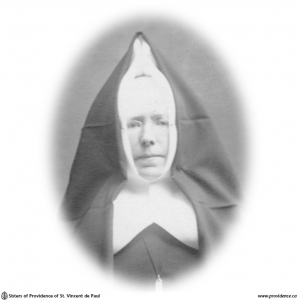 On May 20, 1937, Sister Mary Joseph (Mary McCarthy) was called to her eternal home at the House of Providence, Kingston.

After her profession Sister took part in the laborious works of the House, caring for the poor, soliciting alms, nursing the sick in their homes. All of these were equally agreeable to her and shining forth to the last was her fidelity in answering the first sound of the convent bell.

In her declining years, frail and almost blind, Sister was most exact in following the rule, rising at the usual hour and attending daily to all the exercises of the Community. After years of failing health death did not come unexpectedly.