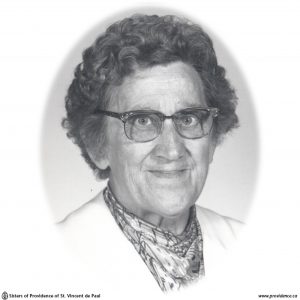 Out of this life I shall never take
Things of silver and gold, I make.
…Shall the Great Judge learn
When my task is through
that my spirit has gathered some riches too?

These lines are part of a poem composed and left behind by Sister Mary Joseph’s mother, Mary Agnes, who died in 1961. Any one who was privileged to know Sister Mary Joseph knows that her spirit did indeed gather “riches” here on earth, and would agree that she freely shared them wherever she went. Hers was a full and exciting life. We like to think that she will continue to scatter God’s rich blessing upon us who will remember her for many years to come.

After being diagnosed with cancer in April 1999, Sister Mary Joseph O’Brien, Sister of Providence of St. Vincent de Paul, died at Providence Motherhouse, Kingston, on June 7 of that same year. She was surrounded by several Sisters and dedicated lay infirmary staff.

Born in Bancroft April 12, 1917, Mary Agnes O’Brien was one of nine children, born to Joseph and Mary Agnes (Golden). She never knew her twin sister, Anna Marie, who sadly died shortly after her birth.

Mary’s was a country home filled with love. There was a lot of hard work but there was fun and music too, and of course, there was regular family prayer which helped to nourish Mary’s special relationship with her God. Education was a high priority and all the children went through high school, which was no easy accomplishment in the early part of the century. The family home of ninety-five years, later owned by her nephew, Jim O’Brien, stood strong until sadly it burned to the ground a few years before Sister’s death.

Mary Agnes entered religious life in 1937 and when she pronounced her vows she happily took the name of her father, Joseph. Sister served as dietary supervisor in congregational convents and hospitals for many years before taking up a second career as a pastoral visitor in Edmonton AB and later in Brockville ON. Her warm, compassionate smile, comforting hand and ready wit made Sister a favorite with patients and staff alike. We might say the first part of her religious life, as a dietician, was spent in feeding people’ bodies and the latter part was spent in nourishing their spirits. “I feel it is a great privilege to be with the dying,” she confided. Having helped so many others in their last hours on earth there is no doubt that Sister is being welcomed by those old friends in heaven.

Since her childhood Sister suffered from asthma, but she never let this problem slow her down. In 1972 she suffered a stroke and was incapacitated for five months, but then she resumed her duties with renewed vigour and enthusiasm. Besides her assigned ministry, Sister Mary Joseph enjoyed being a Eucharistic Minister at St. Francis Church, Brockville. She often visited shut-ins and took communion to the sick in the area.

Sister enjoyed reading, listening to classical music, and on occasion, played her harmonica for her own amusement. While at St. Joseph’s Hospital, Edmonton, she would do anything to make the patients feel better, sometimes even dancing with the old men who could barely stand, playing cribbage, even dressing up at parties to give everyone a laugh. Where did she get the strength to do so much and always remain cheerful? Anyone who knew her well would immediately say it came from her deep prayer life, her close relationship with her God. Besides caring for patients Sister took time to give talks to nursing students and to write articles for inter-hospital magazines.

In 1993 Sister Mary Joseph and her sister, Rita had the pleasure of traveling to Edmonton together. Sister expressed heartfelt gratitude for this opportunity to visit old friends and for all of life’s blessings. Her relatives and friends will long remember Sister’s spirit of gratitude, generosity, humour and compassion.

Sister Mary Joseph was pre-deceased by her parents, by four brothers, John, Thomas, Francis and James and by three sisters, Loyola, Elizabeth, Anna Maries and another baby who died at birth, as well as by an adopted brother, Hubert (Armstrong). She is survived by her sister Rita Whitney of Weston ON and by several nephews and nieces, some of whom were present at Sister’s wake and shared favourite memories of all that she meant to them. As her niece, Wendy Bertin remarked, “Sister Mary Joseph spent her life being kind, and after, that is all that really matters.” The story was also told by a Sister of Providence that Sister Mary Joseph helped a priest who was stricken with multiple scleroses and confined to a wheelchair, to “con-celebrate” daily Mass. Since he was unable to speak above a whisper, she recited all the prayers except the Consecration. If, in the future, women are invited to preside at the Eucharistic Table in the Catholic church someone will have to tell Rome that it has already been done.

The Mass of Christian Burial was celebrated in the Motherhouse chapel on Thursday June 10, 1999 by Most Rev. F.J. Spence, Archbishop of Kingston, assisted by several members of the local clergy. Rev. J.G. Hibbard gave the homily in which he compared sister’s life to a candle which gives of itself in order to shine light on the world. That is what Sister was invited by Jesus to do and that is what she did so very well. May she rest in the peace of Christ.