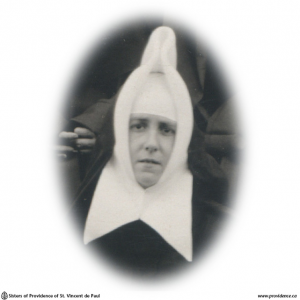 Honora McDermott was born in the city of Quebec, daughter of the late Joseph McDermott and Annie O’Farrell of that city. She entered the House of Providence Novitiate in 1923, and made her profession in August 1925, taking the name of Sister Mary Josepha.

Before entering the Community, Sister taught school in Quebec, and after her religious profession she was employed in the Kingston Separate Schools for some years. Then the need arose of a teacher for St. Joseph’s Vocational School in Winnipeg, and Sister M. Josepha was sent to assist in the education of the children of that institution.

While most successful in her work at St. Joseph’s, the western climate seemed unfavourable, and for reasons of health Sister returned east in 1946. After a year at the Father Dowd Home in Montreal, she was appointed to St. Mary’s of the Lake Hospital. Here, although her health remained precarious she rendered valuable service down the years, assisting in the lighter duties of that Institution until two years ago when stricken with cancer which proved fatal. Although she spent several weeks in the General Hospital for special treatment prescribed by her physicians, which gave her temporary relief, she soon found herself with little or no hope of improvement, as she became gradually worse and her sufferings increased. She now realized her serious condition and tried to make the most of the time that remained in preparation for her eternal home.

Sister was surrounded with every spiritual advantage, and appreciated the privileges at her disposal, which were her greatest consolation in those last sad days as she awaited the final summons. Although her death was expected, the call was rather sudden at the last, but we trust our dear Sister M. Josepha was well prepared to receive the rich reward of a dedicated life, and a welcome rest in the Sacred Hearts of Jesus and Mary, whom she tried to serve so well.

The funeral and Pontifical Mass was celebrated by Archbishop O’Sullivan assisted by the Cathedral Clergy. The epistle and Gospel of the Mass was permitted for the first time to be read in the vernacular. This change in the liturgy is our first experience as a result of the Ecumenical Council.

Burial was in St. Mary’s Cemetery. Father Keyes assisted by Father Brady recited the prayers at the grave.