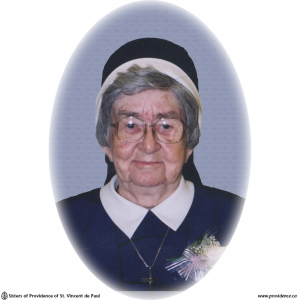 Helena Bernice O’Neill was born in Marmora, Ontario on November 6, 1912, the eldest of four girls. Although she was baptised Helena Bernice, she inherited the name Ellen which was an old family name on both sides of her family.

She entered the Novitiate of the Sisters of Providence of St. Vincent de Paul on December 5, 1932 and made First Profession of Vows on March 19, 1935. She was then sent to St. Mary’s of the Lake Orphanage until September of that year to help care for the small children. Then she went to Arnprior as house keeper. It was here that she recalls learning the art of cooking under the able guidance of Sister Mary of Lourdes. She went on to St. Francis Hospital in Smiths Falls where she was instructed in practical nursing by two of our Sisters, who in her words “grounded us well, no half measures in the care of the sick and professional ethics. Nothing but the best was good enough.” Sister worked as a practical nurse until 1940 when she went to the Ottawa General Hospital to train as a laboratory technician.

For the next 30 years Sister Josephine was in charge of the laboratory at St. Francis Hospital in Smiths Falls. In her words, “It was only God Himself and Our Blessed Lady who saw me through the many years at this task and many were the blessings.” She continued as a lab technician in Camrose, Alberta for the next 4 years along with being Superior of the local community. In 1974 she went to St. Vincent de Paul Hospital in Brockville to assist in the laboratory and with pastoral care. Three years later her full time ministry became pastoral care. In recognition of her care ministry she was awarded the Ontario Bicentennial Medal for Volunteer Work in 1984. In 1992 she was the recipient of the Commemorative Medal for Canada’s 125th Anniversary.

She attributes the success of her ministry to “relying heavily upon my rosary devotion. Any success I have ever had in my life must be attributed to the prayers of the holy rosary. Without my rosary I would be like Samson without his hair. His strength was in his hair; mine is in the Rosary. Without my rosary I wouldn’t have anything to offer anyone.” Sister Josephine touched the lives of many people who saw in her God’s tender loving care for them.

The Mass of Christian Burial, held in the Chapel of Mary Mother of Compassion, Providence Motherhouse on April 27, 2009 was presided over by Friar Edward Debono, OFMConv., Rev. Msgr. Don Clement, homilist, and several members of the clergy were in attendance as were many of her relatives and friends.