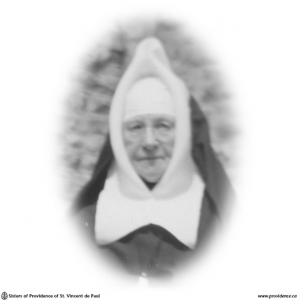 Born in Chesterville, Ont., she was a daughter of the late Thomas McMahon and Mary Anne Kearney who gave two other daughters to religion as members of our Community. They were Sister M. Seven Dolors who died in 1949, and Sister M. Henry on the staff of St. Vincent de Paul Hospital.

Before Sister M. Juliana was admitted to the Novitiate in 1905, she taught in Chesterville, and after she made her religious profession in 1907, she returned to her home town on the staff of the new St. Mary’s Convent and School which were opened that same year with our Sisters in charge and remained there for five years. The remainder of her forty-six years of teaching was spent in the primary classes of Arnprior and Perth.

Upon her retirement in 1953 Sister M. Julian was publicly honoured by the pastor and people of Perth, who had known her for twenty-seven years as a teacher and six years as Superior of St. John’s Convent. On this occasion she received from them tangible proof of their appreciation and well merited praise for her excellent work as a teacher who “was a mother to the little ones starting school, and who “implanted religion deeply in their hearts”. Her kindness was proverbial and made a lasting impression on parents and children.

Always blessed with good health and never admitting illness, in the last two years of her life Sister was a victim of cancer. She submitted to surgery but while it may have helped to prolong life it did not cure the disease. After she recovered sufficiently to get around she appeared well as usual, but her condition was serious enough to require special care which surprisingly enough she attended to her self. Sister M. Henry was her constant and faithful companion to the last. Death came rather suddenly, but she was blessed in escaping prolonged sufferings which is often the sad lot of sufferers from cancer.

His Grace Archbishop O’Sullivan offered Solemn Requiem Mass in our Chapel of the Immaculate Conception here at the Mother House, Heathfield. Beside Sister M. Henry the only surviving relative is a nephew, Joseph McMahon administrator of separate schools in Niagara Falls, who was present at the funeral.