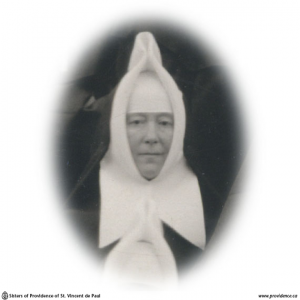 Sister Mary Justin, for forty-one years a member of our Community, died here at this Mother House, Tuesday, May 27th after a lingering illness of several years. In 1954 she was transferred, with a number of sick Sisters, from the House of Providence to our new Marian Infirmary.

Born in Clayton, Ontario, Victorine Bernadette Letang, as Sister was known, she moved to Almonte when very young with her family, and there received her elementary and high school education.

In 1917 she entered the Novitiate at the House of Providence, and after her profession in 1919 she trained as a dietitian and for several years had charge of the dietary department of St. Vincent de Paul Hospital, Brockville.

When failing health obliged her to give up duties in the hospital, she occupied herself with artistic needlework in which she excelled. Although above the average age when admitted, as she had to take care of her aged parents until they died, she soon adapted herself to the new life, and was most appreciative of her good fortune in being able to satisfy her long-felt desire to devote herself to God in the religious state.

On March 18th she suffered a stroke, and although she never regained physical health she recovered her mental faculties and was able to make her last two months a fervent preparation for death. Of a family of twelve only two sisters survive. Group Captain, Rt. Rev. L. A. Costello, of Ottawa and Rev. Arthur Conlon, S.J. of Toronto are nephews.

Interment was in St. Mary’s Cemetery. Msgr. Costello and Rev. Thos. Brady offered the prayers at the grave.