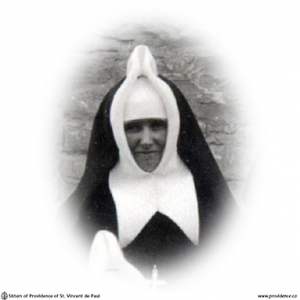 Sister Mary Kevin died at the Marian Infirmary on Friday, April 18, 1958, after an illness of some five years. Born in the parish of Killasser, County Mayo, Ireland, Catherine McNulty, as Sister was known, she came to Canada in April 1914 to enter the Novitiate of the Sisters of Providence, Kingston, and was professed in July 1916.

After her profession Sister spent some time in Kingston, Brockville, Lancaster and Apple Hill in the East and fifteen years at St. Joseph’s Hospital in Edmonton. In delicate health she returned to the Mother House in 1955, but was able to attend Mass quite regularly and visit the chapel. On Passion Sunday, preceding her death, she fell in the Infirmary corridor and fractured her hip. During this time she suffered great pain without being able to get much relief and surgery was out of the question on account of her condition. Although the doctor held out hope of her recovery, it was decided to have her anointed on account of her advanced age. Accordingly, the evening of the opening of our retreat Sister received extreme unction. Only five days later she complained of not feeling well and thought she would die that day although there was no apparent sign of death. About five o’clock in the afternoon she took a weak turn and before the Sisters who were with her could realize it in less than a half hour Sister had passed to her eternal home. The last of her many fervent ejaculations was an invocation to Our Mother of Sorrows at the Foot of the Cross to pray for her.

Sister Mary Kevin’s death occurring during the Sisters’ retreat was an occasion of many extra prayers for the repose of her soul. Sisters were to be frequently in groups around the bier praying the Rosary, etc., while the remains awaited burial. She funeral mass was offered by our chaplain, Rev. Father Brady, assisted by Father Cummings and Father Keyes, after which burial took place in St. Mary’s cemetery, with Father Brady reciting the prayers.

In his conference, after the funeral, the retreat master made reference to the deceased and said: “Sister Mary Kevin knows now how wise it was to live for God. Having been grounded in the Faith in her native land, the green Isle that is the home of saints and scholars, she left her family and country and traveled across the sea to join the large family of Sisters of Providence. One of her former Superiors told me of the edifying life she led. This morning her body was escorted, by a number of Sisters on the first lap of that journey which will bring it finally to the eternal home – Heaven.”

The only known surviving relatives are a nephew, Rev. J.T. Conlon in Los Angeles and a cousin, Mrs. Leahey of Mass., U.S.A. who were notified of Sister’s death.