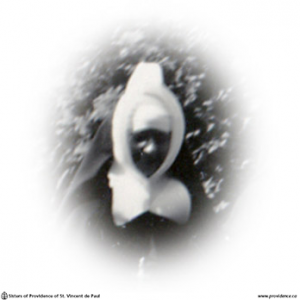 Sister Mary Lamberta died suddenly on Saturday evening, June 23, 1951, at the House of Providence, Kingston. She had been ill over two years, suffering from a heart condition and was confined to the infirmary several months. At the last her death was most unexpected. When she took the attack Sister M. Winnifred was present and realizing Sister was dying had only a few minutes to sprinkle holy water and present the crucifix which she kissed – a sign that she was conscious. In a few moments she was in eternity. May her soul rest in peace!

Catherine Bernadette Donovan who was born in Toledo, Ontario, entered the Novitiate in Heathfield, on August 15, 1930, and two years later on the same date, she made profession. Having studied at Glen Nevis, she attended Ottawa Normal School. Graduating from Normal she was appointed to Smiths Falls School and later to Arnprior where she taught until 1949.

She was virtuous, pious, gentle little Sister. Although her life was comparatively short, we trust, it was full of merit for eternity. She died almost instantly without any special warning or preparation, but her everyday during that long trying illness which kept her confined to her room for so many months, was a grand preparation borne patiently and with edifying resignation for her divine Spouse and Saviour Jesus Christ.

Her parents, four sisters and two brothers survive. They were deeply stirred by the suddenness of her departure, but they displayed a fine spirit of faith and accepted the cross bravely.

His Grace sang the Mass for the repose of her soul, after which burial took place at St. Mary’s Cemetery.