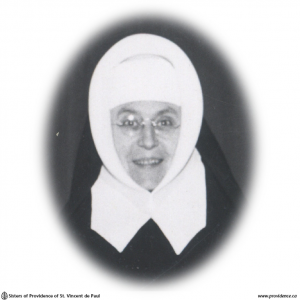 On a farm home in Billings Bridge on the outskirts of Ottawa, Cecilia Charlotte Otterson was born on May 15, 1898, one of eleven children (two of whom died in infancy) entrusted to George Ottterson and his wife, Mary Anne Collins.

Cecilia was blessed with a keen alert mind, with a love of beauty that led to appreciation of literature, music and art, with a cheerful disposition and a sense of humour and with warmth of heart that was nurtured in the bosom of a large affectionate family.

After attending the local public school, she went for high school education to Sacred Heart Convent, Ottawa, under the direction of the Grey Nuns and graduated with Matriculation to Ottawa University and extra courses in music and art. For four years she was employed in the civil services of the Federal Government. It was characteristic of her generous loving nature that one of the purchases she made with her first salary cheque was a saddle for a younger brother.

In 1923 she responded to a call she had been hearing from time to time, a call to give herself to God in religious life. So she came to the Novitiate at Providence Manor, and made profession two years later as Sister Mary Laura.

Superiors thought that she was suited to the teaching apostolate and had her apply for admission to teachers’ college. But the Ontario Department of Education at that time would not accept qualifications except those obtained by their departmental examination. So Sister was obliged to attend for a year Maryvale Abbey High School in Glen Nevis and repeat all matriculation subjects. The result – she obtained first class honours in all subjects.

The year 1926-1927 she attended Ottawa Teachers’ College and then began a teaching career of almost 35 years. She taught in Belleville, Tweed, Perth, Apple Hill and Montreal. Her longest term, 12 years, she spent at King, Ontario.

Here, about 25 miles from Toronto, in the early thirties Rev. Francis McGoey, in charge of social welfare in the diocese, had persuaded the government to grant a tract of land on which to settle some 40 Catholic families suffering from the economic depression. Father hoped that this project would enable these people to recover by their own efforts. He established a separate school area, had the men build a two-room basement school, and asked our Community to send two teachers, a music teacher and a nurse.

Sister Mary Laura was assigned in 1937 principal of the school and local superior of the group of four who took up residence in a tiny frame cottage they named Sacred Heart Convent. Conditions were primitive in correspondence from the Superior General we read that “it was well understood that the Sisters would have no conveniences not enjoyed by their less fortunate neighbours”. There was electricity, but there was no running water and no plumbing in school or convent. Water for cooking had to be carried from a well some distance away, and if the senior boys of the school forgot to bring it, the Sisters had to go for it themselves. It was not until 1946 that the first school above ground was built.

During these years, Sister M. Laura taught the senior elementary grades including Grades IX and X; and besides the regular academic courses, in the curriculum Sister and her companions taught agriculture and home economics. A high standard was maintained and pupils of Sacred Heart School won prizes in essay and poetry contests, in public speaking and archdiocesan religious programs.

Sister Mary Laura had done the spade work for an educational system in the area which in 1968 comprised two schools – the original Sacred Heart School enlarged to nine rooms accommodating Grades I – VI, and Holy Name School for Grades 7 and 8. Buses transported pupils from surrounding districts.

Her twelve years in King City, however, took a heavy toll on Sister M. Laura’s health, especially her emotional balance. She continued to teach; her mind lost none of the keenness. It had always worked so fast that one was reminded of a statement made about Robert Browning: “He leaps from peak to peak and leaves his less agile readers floundering in the valleys.” Yet she was sympathetic with slow learners and was able to detect and develop potential in more than one pupil whom other teachers thought could not go far intellectually. But in her later years she had difficulty in maintaining her former patience and self-control, her pupils found it hard to keep up with her, and companions did not always understand her suffering.

In 1962 she retired from the classroom for a few years fulfilled light duties at the Motherhouse. In 1970 she had to be admitted to the hospital floor of the Infirmary and remained a helpless invalid until her death. During these years she was visited frequently by her sister Lillian, who, although saddened by Sister’s inability to communicate to any extent, was happy to see the devoted care she was receiving from the nursing staff.

Twice she suffered acute attacks of illness when it was thought she was dying. But she rallied until on August 11, 1980 she developed pneumonia, and a week-long agony commenced. On August 18th nurses worked constantly to alleviate her distress, and sisters prayed continuously at her bedside.  At 11:00 p.m. God called her home.

The funeral Mass on August 21st was concelebrated by His Grace Archbishop Wilhelm, Father McAvoy and Father Ryan, chaplains at Heathfield, and Father Murray, O.F.M. Cap. and C. Girodat, C.R., who were conducting retreats for the sisters.

surviving are three sisters – Lillian Otterson, Mrs. Marguerite Rowan, and Mrs. Dorothy Kennedy, and one brother George, all of Ottawa, and all of whom along with several nieces and nephews attended the funeral.

Sister M. Laura will be remembered as a talented, capable, generous member of the Community, who crowned a fervent religious life by a long period of patient suffering.