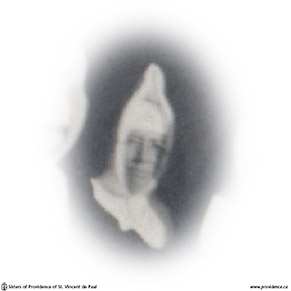 During her forty-four years of religious life Sister devoted herself to the care of the sick, the infirm and the orphans.

Her assignments of Sacristy work were her joy and happiness, giving proofs of her love and care for her Divine Master.

Sister was blessed with a cheerful happy disposition, which even in suffering radiated sunshine. She had submitted to a critical operation on medical advice, in the hope of obtaining relief from an illness of long duration. This necessitated her transfer from St. Francis General Hospital, Smiths Falls, to Ottawa. However, after the patient endurance of much suffering her final summons, though unexpected, she calmly accepted, with perfect resignation to the will of God.

Sister had spent forty-four years in religion. May her soul rest in peace!

Elizabeth Whalen entered the congregation as a Tertiary Sister in 1898 and was known as Sr. Anastasia. Tertiaries were auxiliaries who performed domestic labour and were part of the Congregation from 1895 to 1907, when the program was phased out and they were invited to enter the novitiate. She entered the Novitiate on November 21 1907.