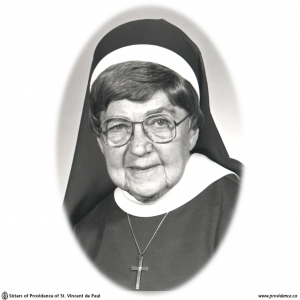 Irene Isobel Carter was born in Montreal, Quebec, on September 30, 1897 (the day on which St. Therese Lisieux died) and was baptized on October 3. She was the second eldest of eight children born to Thomas Joseph Carter and Mary Agnes Kerr. This illustrious family gave to the church two religious Sisters, Irene (Sister Mary Lenore) and May (Sister Mary Carter, R.C.S.J.), and two priests, Alex, who became Bishop of Sault Ste. Marie Diocese, and Emmett, who became Cardinal Archbishop of Toronto.

Irene Isobel Carter was educated by the Sisters of the Congregation of Notre Dame. Prior to entering the Novitiate of the Sisters of Providence in Kingston on January 9, 1916, she worked as a secretary in a real estate office. Following her Profession on August 22, 1917, at which Irene took the name of Sister Mary Lenore, she went to Maryvale Abbey, Glen Nevis, to obtain Ontario standing for entrance to Normal School. On August 8, 1921, Sister Mary Lenore made her Final Profession at the House of providence Kingston.

As a member of the Congregation of the Sisters of Providence, Sister M. Lenore used her many talents generously and effectively. She was a gifted teacher, a highly competent principal, an effective Council Member, and a wise Superior General, but most of all and basic to all, she was a Sister of Providence whose love for and loyalty to her congregation were outstanding.

Sister Mary Lenore had a fine academic and professional background. She received her Kindergarten/Primary Diploma in 1923, Pius X Liturgical Music Teachers’ Diploma in 1927, Music Supervisor Diploma in 1929, the degree of Bachelor of Arts (Queen’s University) in 1937, High School Assistant’s teaching certificate in 1937, and the degree of Master of Arts in English Literature (Ottawa) in 1949.

Sister seems to have taught with equal success every grade from primary to thirteen. She loved and related well to children. In her own family it was she whom her mother chose to help with the younger children, rather than Margaret, her older sister, who assisted with housework. Sister treated children with great respect, making them feel quite grownup. Recently, a young woman who is now a religious Sister recalled that Sister M. Lenore had made her feel, at age 6, as if she were quite adult – an experience that she had never forgotten. In relating with her students, whatever their age, Sister used the approach of kindness and trust. She wisely closed her eyes at times to the peccadilloes of youth, but required that in matters serious the student adhere to the standards of a Catholic school. Sister taught her pupils not only academic subjects like French and English, but also an appreciation of music, of drama, and of public speaking. Dearest to her heart must have been her teaching of religion and especially the preparation of little ones for their First Holy Communion, as task which she undertook with joy in Glen Nevis, Lancaster, Smiths Falls and Kingston. Love of Our Lord in the Blessed Sacrament was an important part of Sister M. Lenore’s life and her daily Holy Hour after her teaching career ended was proof of this.

Sister M. Lenore’s qualities of leadership were recognized by the Congregation when she was appointed principal of St. Michel’s High School, Belleville, in 1938. There Sister guided students, increased the academic options offered by the school, initiated vigorous Parent-Teacher Association, and so conducted the school that it was favourably assessed by the Department of Education, whose inspectors paid yearly visits.

Besides giving leadership in her own school, Sister M. Lenore gave support and direction to the Ontario English Catholic Teachers’ Association, the importance and value of which she recognized. She became president of the O.E.C.T.A. and subsequently president of the Ontario Teachers’ Federation, the first Sister ever to fill this position. Thanks to her efforts and initiatives, salaries were raised to a level at which teaching in Catholic schools became a viable profession for both single and married persons. Sister chaired the Curriculum Committee of O.E.C.T.A. for eight years. During this time the Committee conducted a seven-year study of Integration in Education, with annual three-day conferences attended by representatives of the Department of Education, Parent-Teachers groups, various affiliates of the Ontario Teachers’ Federation and O.E.C.T.A. members from all parts of the province.

In 1959, Sister M. Lenore’s apostolate of thirty-nine years as an active teacher and principal came to an end when she was elected to the position of First Assistant to the Superior General. Her ability as a wise advisor, a dedicated religious and a competent executive was recognized again in 1965, when she became Superior General. This period, 1965 to 1971, was a very difficult one, following as it did on the heels of Vatican II. Sister M. Lenore and her Councilors guided the bark of Providence through those trying years with courage, steadfastness, and sensitivity. A leader with less faith and trust in Providence might well have been discouraged as the numbers of those leaving the Congregation increased, while those seeking admission diminished in number. Sister M. Lenore, however, maintained her equanimity, filled her office to the best of her ability, and, as she always did, left everything in god’s hands.

As Superior General, Sister M. Lenore acceded to the request of the Holy Father that congregations which could do so should send Sisters to the mission fields in Latin America. From the beginning of her term of office, Sister encouraged the already ardent interest of her sisters in the foreign missions. Within a year, after visiting Guatemala, Peru, and Chile with Sister Marion Farnand, Sister, with the consent of her council, made a decision to open two missions, one in Guatemala and the other in Peru.

In 1971, at the end of her term of office as Superior General, Sister M. Lenore returned to Belleville as Superior of St. Michael’s Convent, where her kindness, her enjoyment of fun, and her deep spirituality were experienced and appreciated by the Sisters. Six years later, she took up residence at Providence Motherhouse, where she directed retreats and gave spiritual direction until her retirement in 1985. During the years from 1977 on, Sister M. Lenore’s health and happiness were the constant concern of her dear friend, Sister Marion Farnand.

As a person, Sister M. Lenore was a gifted and capable woman with intellectual and other talents in abundance. She had a great capacity to love others, a strong faith in her Sisters, and an inspiring confidence in their ability to achieve the objectives set for them. She also had a wonderful common sense which recognized that one hundred percent success is an unattainable goal to set for oneself or for others. Sister possessed a warm and lovable disposition; her graciousness and dignity, coupled with her integrity and love for truth, attracted others to her; she smiled easily, had a delightful sense of humour, and was very rarely seen ruffled or impatient. She accepted responsibility easily and accomplished her duties quickly. These qualities led others to choose her for the leadership positions which she carried out with dignity and grace.

Father Donald Clement, Sister M. Lenore’s confessor for many years, often remarked on her peacefulness, especially during the last months before she died. When asked if she feared dying, she always had the same answer, “I gave myself to God in my youth, I have tried to serve Him faithfully all these years; so why should I be afraid?” She loved to quote Luke 23 – The good thief said: “Jesus, remember me when you come into your kingdom.” “Indeed, I promise you this day you will be with me in paradise.” – at these words her finger would point to emphasize “this day”, not next week or tomorrow, but “this day – today”. Sister Lenore Carter died on July 5, 1990, in the 75th year of her religious life.