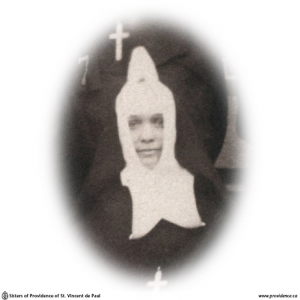 In the pages of this unpretentious volume is narrated a “Memoriam” of a virtuous young religious whom the community lovingly cherished in life, as Sister Mary Leo, and whose death on the morning of Dec. 19, 1900 was deeply lamented by her Superiors and companions.

Mary Ann Fogarty was born Nov. 3, 1854 in Chicopee, Mass. of parents who were natives of Catholic Ireland. She received all the advantages of a Christian education from the Sisters of Notre Dame, under whose efficient tutorship she rapidly developed rare talents and advanced in piety and all the virtues that best adorn the youthful character. But God early called to Himself her devoted parents heaving to their little daughter the education and care of her only brother Richard, together with the management of a considerable estate.

While sharing the quiet enjoyments of the world, she aspired to the dignity of Spouse of Christ by the choice of the hidden life of a religious and bade adieu to her friends to enter the Novitiate of the Sisters of Charity, in Leavenworth, Kansas. In so holy a solitude the faithful Novice failed to find the contentment she so ardently sought. Much as the Community wished to retain this amiable and useful candidate, she was forced to abandon the hallowed retreat. After spending a year at Boarding School in a Convent of Mercy, Chicago, she happily obtained admission to our Community, Dec. 15, 1881, and from the day of her entrance into the Novitiate she gave proof of the excellence of her vocation by labouring seriously to advance in perfection.

Two years of probation passed in the peaceful and happy fulfilment of daily duties under the sanction of obedience, rendered her pure soul more acceptable in the sight of her heavenly Bridegroom, to whom she pledged her final vows on the feast of St. Joseph, 1884.

Although she was never robust in health, her usefulness, whether in the class-room or in other offices, was always most satisfactory, and wherever employed, order and neatness were paramount. Her love of holy poverty and its sister virtues, mortification and humility, was remarkable.

Intelligent and fond of study, she was most ingenious in devising means to communicate knowledge to the pupils under her charge, and it is especially among the Catholic families in the Town of Perth, that the name of Sister M. Leo, as a devoted teacher, is gratefully and reverently mentioned. Several years she taught the Orphans’ Class at the Mother House, where by her piety and gentleness she won the hearts of all, even the rudest little waif, and she was thus enabled to promote the best interests of her pupils by her influence over them.

In the Community she might be justly titled the “Defender of the Rule,” not the slightest delay in obeying the signal to the different observances; not a useless word infringing on the monastic silence, by a warning finger placed on her lips many a thoughtless companion, who ventured a word violating charity or silence, was gently reminded of duty. By her genuine wit and modest gaiety she contributed innocent enjoyment to dull moments of recreation, immensely increasing the health and contentment of her religious associates. We can only think of Sister Mary Leo as a soul marked by her signet of sanctity from her earliest youth, and she was undeniably left to this Institute a sweet legacy in the bright example of her holy life.

The too brief and useful career of our loved Sister was destined to receive the sanctifying touch of suffering, patiently endured, and this for nearly two years. It was during the autumn of 1898 that an acute attack of pneumonia began the slow undermining of her health and when obliged to resign her post in her beloved class-room, she turned her attention to other duties with a cheerfulness peculiar to herself.

In April, 1899, she was appointed Directress of the Tertiary Sisters, but delicate health and her tender conscientious sense of duty, urged a request for removal from that responsible office.

A slight stroke of paralysis in the spring of 1900, left our dear Sister helpless, and for a time unconscious. Recovering partially the use of her faculties it was very consoling to the Community, and especially to herself, that she was able to receive Holy Communion from time to time and join in other religious exercises. Frequent nasal haemorrhages the result of a loathsome catarrhal affection, prostrated her, until the poor worn frame could resist no longer. Death was really approaching, yet it had no terrors for our dear patient; her brave, trustful, and resigned heart bore her many sufferings sweetly and serenely; in silence and in hope she found her strength.

Fortified by the last Sacraments and surrounded by all the consolations of holy religion, our cherished Sister calmly passed away December 19, 1900, cheerfully laying down a life which had been wholly devoted to the service of God and His poor.  May the bright example of her virtues and the remembrance of her kindly deeds, serve to sweeten the bitterness and trials of life and make us worthy to meet her again in the heaven of eternal felicity!