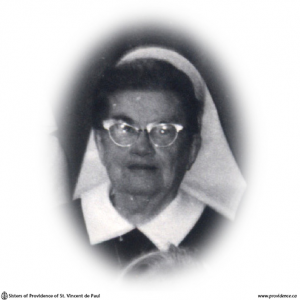 In the rural community at Dalkeith, Glengarry County, Ontario, one of the outstanding families was that of Alexander MacDonell and his wife, Isabella. Twelve children blessed the home, five boys and seven girls.

The eldest girl, Margaret, after completing her secondary education at Vankleek Hill High School attended Ottawa Teachers’ College and commenced a teaching career destined to last half a century.

She spent six years in local elementary schools before hearing the call of Christ to a more intimate union with Him in religious life. At first she thought of joining the Sisters of Mary, whom she had met in Vankleek Hill. But in the summer of 1923, a visit from a cousin, Mary E. MacDonald (Sister Mary Elizabeth) who was about to enter the Novitiate of the Sisters of Providence in Kingston, aroused her interest in this strictly English-speaking community and she said to Mary K, “I think I’ll go with you.” In 1924, an invitation to attend a retreat for young ladies arranged by Msgr. D. R. MacDonald at Maryvale Abbey, Glen Nevis, gave her the opportunity to meet the Sisters of Providence and confirmed her choice of the Kingston Community. She entered our Novitiate on January 6, 1925.

After Profession in 1927, as Sister M. Leo, she was assigned to St. John’s School, Perth, and later served in various parishes of the diocese. She was one of the group which laid the foundation of the Sacred Heart school in the Czechoslovakian community of Batawa, teaching for five years in the basement of the church and living in a tiny cottage built for a rectory. Sister was principal of the new school erected tin 1951 and enjoyed two years of comparative comfort in the small, modern convent provided by the Community.

The separate schools in Kingston benefited from Sister’s services for sixteen years – four years in St. John’s and twelve in St. Mary’s. In the latter school her experience was varied. In a class of forty-four Grade IV boys she enjoyed many above-average students – to name but three, the Gibbons (later Dr. Edward and Judge Hugh) and Laurier LaMarche, now a priest of the diocese. But her heart went out to the less talented children, the slower learners. So in the summer of 1935, she, along with Sister M. Fleurette (Martha McKenna) was sent to Toronto for a course in Special Education, and in September was given charge of a class of nineteen boys between the ages of eight and sixteen. The auxiliary class, as it was called, the first of its kind in the city. An attempt to establish such a class in a public school had not succeeded.

But Sister M. Leo did not lose hope. The hardest part, she found, was to convince parents and older boys that they were not being discriminated against, but were being given an opportunity for more help than could be given them in a larger class.

Her optimism and enthusiasm prevailed. The school board provided generously books and equipment and the progress of the “Ox-Class”, as the boys dubbed it, attracted the attention of educationists in the city. Principals of the public school visited it, and professors from Queens. One of these asked Sister if she realized she was doing the work of four – academic instruction and manual arts with pupils of so many different grades. Inspectors of special education classes gave it approval in 1936.

With individual help and encouragement the boys improved in their academic work, and during the first six years four from the class passed the entrance examination for high school and went to Regiopolis College, one at least reaching Grade XII (in the days when departmental examinations were required).

Nine years of this work, however, took a toll of Sister’s strength. She began to suffer from arthritis in her hands and arms and she was advised by her doctor to give up the hammer and the saw and return to regular classes. After brief terms in different schools, she joined the staff of St. Michael’s Academy, Belleville, where she spent the remaining twelve years of her teaching career, the last two devoted to her old love, the special education class. There was no doubt about Sister’s understanding of the charism of the Community “to serve with compassionate love the needy ones of God’s people”.

Sister M. Leo had a bright sunny disposition with a fine sense of humour; she could laugh about embarrassing episodes; for example, bringing with her to the Novitiate a full-length mirror which the Novice Directress exchanged for a small one to fit a novice’s “cell”; or the cold winter evening when she was returning from school, wrapped in one of our old padded cloaks, and fell into a snow drift, she cloak impeded movement and she had to be helped to her feet by a passer-by.

She was devoted to her family and suffered keenly from the sorrows caused by deaths of the members. Two sisters and three brothers died at comparatively early ages, then her father and a married sister. Her mother lived alone for many years and Sister spent her summer holidays helping her. But the five remaining brothers and sisters and a number of nieces and nephews, most of whom live in New York State, kept in close touch with her, visiting her frequently and taking her to visit them.

After retiring from teaching, Sister spent a few years in the smaller houses of Tweed, King and Smiths Falls until arthritis prevented her from going out to the parish church for Mass and she came to the Motherhouse in 1974.

Here she remained active for almost six years in spite of frequent attacks at severe pain. It was only during her last year that she required the care of Infirmary II – the hospital floor. She could not walk alone without danger of falling, and found it annoying to be restrained in a chair. Yet her devotion to the Sacred Heart and to Our Lady’s Rosary remained with her in those days of failing strength of body and frustration of mind, until God called her home at an early hour of June 13, 1981.

All five surviving members of her immediate family attended the funeral, along with many nieces and nephews four of the latter acted as pall-bearers – Ralph Pinto and Lionel Harris of USA, Garrett MacDonell of Dalkeith and Calvin Harris of Montreal.

In the absence of His Grace Archbishop Wilhelm, Msgr. J. G. Hanley, Vicar General of the archdiocese, celebrated the Funeral Mass with Fathers McAvoy and Daniel Ryan, Heathfield chaplains. In his homily Msgr. Hanley remarked that he did not know if Sister M Leo was a lineal descendant of the family of Most Rev. Alexander MacDonell, first Bishop of Kingston, but she was undoubtedly a spiritual daughter of that illustrious prelate.