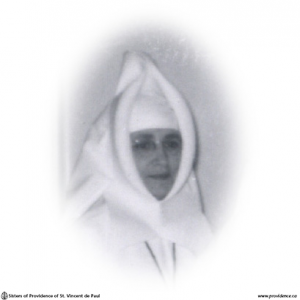 A Sister who could be of much use to her Community for many more years has been called by death to join the ever-increasing ranks of our dear departed in eternity. For more than a year the dread disease of cancer had marked for its prey our dear little Sister Mary Leona who died on Friday, July 3rd, at St. Mary’s of the Lake Hospital.

In the past year Sister had submitted to surgery and Sister prescribed treatments, at the cost of much anxiety and physical suffering, in the hope of getting well, that she might continue to be helpful in the Community. Yet, she was always resigned to God’s will, and willingly made the great sacrifice of her life when she answered the call of her spouse and Lord to receive the reward awaiting her in her eternal home.

Born in the parish of Mount St. Patrick, Renfrew County, of a large family, she entered the Novitiate in 1916, and was admitted to profession in 1918. She was then appointed to St. Vincent de Paul Hospital to take up nursing, and at the completion of the three years’ course of training she graduated in that profession. Sister M. Leona served in the hospitals of Moose Jaw, Edmonton, St. Mary’s, Montreal, and in St. Joseph’s Vocational School, Winnipeg, St. Gregory’s Convent, Picton, and for six years as Local Superior in The Father Dowd Home, Montreal. At the time of her death she was assistant at St. Mary’s of the Lake Hospital.

The funeral Mass was offered here for the repose of her soul by His Grace, Archbishop O’Sullivan, assisted by Msgr. Sullivan and clergy from St. Mary’s Cathedral. Burial was in St. Mary’s Cemetery.

Surviving relatives of the deceased Sister M. Leona are her mother, five sisters and four brothers all of whom were present at the funeral.