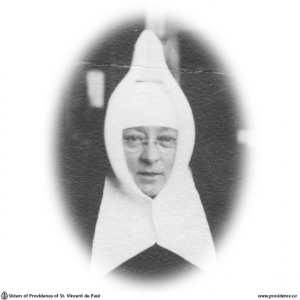 Edith Barry was born and brought up on a farm home in the parish of Morrisburg, one of a family of nine, six girls and three boys. Three of the girls embraced religious life as Sisters of Providence – Edith (Sister Mary Leonard), Elizabeth (Sister Mary Borgia) and Veronica (Sister Mary Emerita).

Edith graduated from Ottawa Teachers’ College and after a few years of teaching entered the novitiate of the Sisters of Providence in 1914. After profession she resumed her profession in the classroom and served in several schools in the diocese. She was a very successful Grade VIII teacher and is gratefully remembered by students who spent their last year of elementary education under her guidance in Perth, Smiths Falls, Tweed, Gananoque and Belleville. She had a special “knack” with the boys of that age group and by her enthusiastic encouragement of their sports managed, as she once remarked, “to get a great deal of intellectual work out of them.” Two of these “boys” of hers are priests of Kingston diocese – Father Tom Raby and Father Ed Keyes, both natives of Gananoque.

Retired from classroom teaching she spent brief periods in St. Joseph’s vocational School, Winnipeg and Providence Hospital, Moose Jaw; for her last five years she was a patient at the Marian Infirmary, “Heathfield”.

About the middle of October she suffered an attack of pneumonia and remained in a weakened condition. On the 26th a severe heart attack necessitated her being taken to Hotel Dieu and with the aid of oxygen she rallied slightly for a day or two. On the morning of the 30th a message came from the hospital that she was sinking, and from then until she died at 10:45 a.m. on the 31st Sisters were with her. Nurses at the hospital were most kind and attentive and death came peacefully and without apparent suffering. She had reached the age of 90 (& 7 mos.) years and had completed almost 63 years of religious life.

In the absence of His Grace the funeral Mass was offered by Msgr. J.G. Hanley, vicar General, with Sister’s former pupil, Father Raby, as con-celebrant. (Father Keyes would have come, but he had a Mass in his own parish.) Father Buckley and Father Raby recited the prayers at the grave.

Sister was the last of her immediate family. Sister Mary Borgia died in 1975 at the age of 90 and Sister Mary Emerita died in 1950 after 34 years in religious life. The only near relatives in the area, Mrs. Dorothy Raney and Mrs. Mary Major, nieces, and a nephew Dr. James Barry of Prescott attended the wake and/or funeral.

Monsignor Hanley’s words in his homily at the funeral Mass are a consoling commentary on Sister’s life:

“Sister M. Leonard had a long life of service to this Community and to the schools in this diocese – a long life of service to God – and she must have carried out that service particularly faithfully to have earned the privilege of going to God on All Souls Day, on the day when the attention of all of us on earth, when the attention of her Sisters in the Community is focused so specially on the Souls in Purgatory, so that if she is numbered among them, by our prayers her time may be shortened. After all, she was given more than the normal number of years on earth, and failing health may have constituted a good part of her purgatory. With this in mind we commend her to the mercy of Christ Whom she served so well. We hope that she will soon be with Him in the fullness of His Presence.”