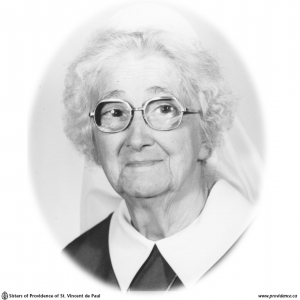 Mary Harriet LeSage, one of 8 children of Mitchel LeSage and Philomen Genore, was born on April 3, 1905, in Otter Creek, ON.

Mary Harriet trained as a teacher in the Peterborough Normal School and taught in Tweed, Otter Creek and Wolfe Island. In 1933, being a woman of adventure. Mary and a friend, Gert, decided to tour Europe during their summer vacation and sailed from New York after a grand tour of the city. They visited many cities in France, Belgium, Italy, Monaco, Ireland and England, returning to Canada the end of August after an event-filled and interesting holiday. Mary Harriet kept a diary of all the places of interest that they visited, which gave a glowing account of their tour.

Six months after touring Europe, Mary Harriet entered the Sisters of Providence on February 15, 1934, and took the name of Sister M. Berna when she made profession on March 19, 1936. Sister reverted to her Baptismal name in 1967. Sister Mary taught for a year as a Novice and continued her teaching career for 43 years in Kingston, Picton, Perth, and Prescott. She always had at least two grades for six years had grades 5 – 8, and taught only one grade the last eight years of her teaching career. She always worked with sodalities or youth groups and visited homes and shut-ins during most of her teaching years. After retirement from teaching, she was Superior and did household duties at Sacred Heart Convent, King [City], general housework and visited the sick in Arnprior, and looked after the dietary needs of the Sisters in Tweed until she retired to the Motherhouse in 1987.

Needless to say, Sister Mary loved life and teaching and recognized that this world is a passing thing. She maintained a respect for all her students and called forth what was best in each one of them – to be the best of what they could be at all times. She helped shape many destinies, influenced many families, was gifted with seeing a spark of goodness in the most despicable character and bringing out this goodness. Sister Mary saw something of God in each individual. Her goodness was lived out in teaching and in service to others. Sister was highly respected for her fairness, justice, and the joy that exuberated from her when she umpired ball games, welcomed guests, etc. She was known for her warmth and loving simplicity in affirming others and always took a great interest in whatever they did. Sister Mary was blessed with a tremendous memory; hers was a full life and she maintained these qualities even in poor health.

Sister kept in close contact with her family and was highly esteemed by her many nieces and nephews. She had an intense interest in her family history, collecting all possible information on her ancestors. She managed to obtain a description of the “LeSage” crest and a copy of the family history dating back to the town of Cavour in Piedmont, Italy, in the 17th century.

Sister May LeSage died on December 2, 1991, in the 58th year of her religious life. The Funeral Mass in the Chapel of the Immaculate Conception was presided over by Archbishop Francis J. Spence and Father A. J. McAulay was the homilist. Many, many relatives and friends were present for Sister’s Wake and Funeral Mass.