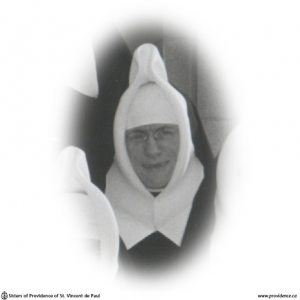 On August 22, 1983, the feast of the Queenship of Mary, one of Our Lady’s devoted clients surrendered her soul to God. During her sixteen years of retirement at the Marian Infirmary in the Motherhouse, until she was no longer able to leave her room, Sister Mary Lidwina never failed to be present in the Infirmary chapel for the daily recitation of the Rosary, and was frequently the leader.

In 1966 after forty-two years of religious life, and while she was stationed at the Father Dowd Home, Montreal, Sister received the first indication that she had been stricken with the dread disease, cancer. Surgery, followed by cobalt treatment, afforded a respite of eight years. Then a second operation was necessary, which gave a few more years of comparative comfort.

In 1967 Sister M. Lidwina came to live at the Motherhouse. By 1978 general health conditions, such as arthritis, frequent attacks of gout, and a failing heart, required that she be taken to Infirmary 2, the “hospital” floor. In spite of much suffering she was able to be up and around and follow the religious exercises until her last year which was one of constant pain. An infected toe had to be amputated; then a femur fracture indicated that cancer was spreading throughout her body. Orthopedic surgery gave some slight relief, but doctors decided that no further treatment could arrest the disease.

For almost three months Sister waited patiently for God’s summons. With tender nursing care and the help of sedatives she was able, almost to the end, to retain her cheery smile and sense of humor.

During her last week someone was with her day and night. On Sunday, August 21, she became unconscious and the following day, Sisters prayed continuously at her bedside, until at 10:15 p.m. she passed quietly away.

Mary Agnes O’Dowd was born in Quebec City on April 4, 1897, and baptized the following day in St. Patrick’s Church, the English-speaking parish served by Redemptorist Fathers. Her parents, Francis Henry O’Dowd and Mary Power, were of Irish ancestry. In 1924, along with two other young ladies of St. Patrick’s, later to become Sister Mary Catherine Dooley and Sister Mary Jean Walker, Mary Agnes entered the Novitiate at the House of Providence.

Her father had died previous to her entrance and her mother, who seems to have been of a possessive nature, was not in favor of her leaving home. Her mother’s attitude was a cross for Mary Agnes throughout her years of formation until on the eve of her perpetual vows, her mother came to the Providence with an outfit of clothing and tried to persuade her to lay aside her religious habit and return to her home. Poor Sister was torn between her desire to remain faithful to God’s call and her wish to do her duty towards her mother. Finally, we presume under direction, she postponed her perpetual vows for a year. At the end of the year, either her mother withdrew her opposition, or Sister decided that her first duty was to God, for her mother was in no way dependent on her for financial assistance, and she pronounced final vows in 1930.

Sister Mary Lidwina devoted her entire active life to the service of the aged, the sick and the poor. She spent twenty years at Providence Manor, and twenty at the Father Dowd Memorial Home in Montreal. Her patience and kindness towards these elderly persons, often querulous and demanding, her sense of humor, and those smiling Irish eyes, which never lost their sparkle during her long years of suffering endeared her to all with whom she came in contact, the patients, their relatives and her Sister companions.

Her funeral Mass was celebrated by Monsignor J.G. Hanley, Vicar General, with concelebrants Fathers Paul McAvoy and Dan Ryan. In his homily, Monsignor, using as his text, the Gospel account of the woman who anointed Our Lord’s feet with precious ointment, made a fitting commentary on Sister Mary Lidwina’s life work. He exhorted us to remember Our Lord’s words on the occasion of the anointing, “The poor you have always with you,” and never to forget that, whatever new apostolate we may undertake in response to the needs of the time, the original purpose of our congregation was to serve the poor.

And Sister Patricia Anne’s beautiful solo after Communion expressed the sentiments that must frequently have filled Sister Mary Lidwina’s heart as she prayed the Rosary.

There is little doubt that on the night of August 22, 1983, the Mother of Christ was standing on the shore with her Son to welcome Sister Mary Lidwina.