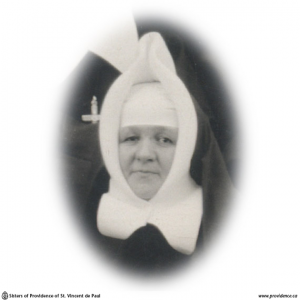 Born at Stanleyville, Ontario, Harriet Quinn was the daughter of John Quinn and Elizabeth Byrne, natives of that locality. At an early age she entered the Sisters of Providence Novitiate which was then located at the House of Providence, Kingston, on December 10, 1901. Sister made her religious profession in 1904. After this she was sent to take up nursing at St. Vincent de Paul Hospital, Brockville. Here she spent several years helping with the sick, and was then sent to St. Francis Hospital, Smiths Falls, where she helped in various offices, as well as with the sick.

Sister was of a bright, cheerful disposition and blessed with a delightful sense of humour and ready wit. This was an asset in helping to bring sunshine to the sick wards. Long after she had retired from hospital duties, she was gratefully remembered by patients who had formerly been in her care. All through her illness she retained a bright outlook until death which came rather sudden and was unexpected by herself and others.

One sister in Westport, Mrs. Irvin, survives. Sister M. Bernice of our Community is a niece.

His Grace Archbishop O’Sullivan celebrated Pontifical Mass on the 7th. He was attended by several of the Cathedral clergy. Interment was in St. Mary’s cemetery. R.I.P.