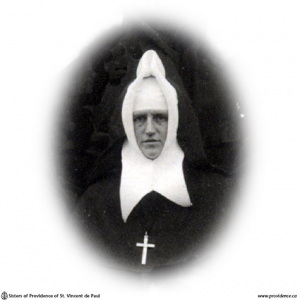 Sister Mary Louise died at Sacred Heart Convent, Arnprior, and December 11, 1951. Her death occurred during the night in her sleep. Sister had taught all day on Monday and appeared to be in her usual health and spirits.

She was the former Mary Elizabeth McKeon, a native of Erinsville, Ont. She entered the Novitiate on September 1, 1910, and was the first postulant admitted to the newly established Novitiate at St. Mary’s of the Lake.

Sister had been on the teaching staff of Sacred Heart School, Arnprior, and the news of her sudden passing occasioned wide-spread regret in that community. She had been looking forward to Christmas, and remarked that she hoped to continue her uninterrupted teaching record of eight years without losing a day until then, when she hoped to have a rest, as she complained of being very tired. She took her allotted supervising period at the recess and lunch sessions on Monday and only retired to her room after finishing her day’s duties. It was then earlier than the regular hour, but Sister Superior called to see if she required anything before the Sisters retired for the night.

In a message of sympathy to the Community from the Arnprior School Board, it was stated that “Sister’s sparkling personality and understanding ability in the handling of primary children had endeared her in the hearts of the parishioners of Arnprior for all time.”

There was Requiem Mass in Arnprior Church and the Libera chanted by the pastor, Rev. J.T. Warnock. Following this the remains of our dear Sister M. Louise were taken to Kingston.

The funeral on December 13, Feast of St. Lucy, coincided with the ninetieth anniversary of our foundation in Kingston. His Grace Archbishop O’Sullivan celebrated the Mass and was assisted by the Cathedral clergy.

Her sister, Sister M. Pauline, much her senior, survives and is on the teaching staff of St. Mark’s school, Prescott.