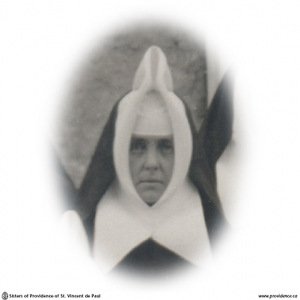 Sister Mary Loyola, Alice Whelan, died at the Marian Infirmary, Heathfield, on September 15th, the beautiful Feast of Our Mother of Sorrows, to whom she had special devotion. Sister was born in Westport, Ontario, daughter of the late John Whelan and Jane Patterson. When very young, she was deprived by death of her mother, and was brought up by an aunt until she decided to enter religion. Her aunt was opposed to her entering the Convent because she thought her too young, but Sister persisted in her choice, following the example of her older sister Teresa (Sister M. Martina) who had entered the Novitiate six months before. Sister M. Loyola was admitted as a postulant on the Feast of Our Lady of Mount Carmel, July 16, 1906.

After her profession in 1908, she attended Ottawa Normal School and later did exceptional work as a primary teacher in the schools of Arnprior, Perth, and Belleville. She was one of the four Sisters who formed the first staff of St. Francis School, Smiths Falls, when it was opened in 1915. Zealous, devoted, and much beloved by her pupils and associates, she was never-the-less, on account of impaired health, obliged to give up teaching and for eighteen years she devoted herself with great charity and kindness to the care of the aged in the House of Providence. A year ago she suffered a stroke, and since that time had been a patient in the infirmary.

On Wednesday morning Solemn Requiem Mass was offered here in the Chapel of the Immaculate Conception by His Grace Archbishop O’Sullivan. He was assisted by Monsignor Hanley and priests of St. Mary’s Cathedral. There were eleven priests in attendance at the Mass. Two brothers predeceased Sister; Father Walter Whelan of the Kingston archdiocese and Father Jas. Whelan of the Basilian Order.