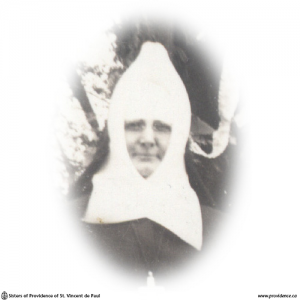 Since her admission to the Hospital in January, her condition was considered serious. She submitted to a critical operation (removal of the spleen), since there was no alternative if she were going to get well. Her two weeks following she seemed to making a splendid recovery. Suddenly however, she took a turn for the worse and all that medical skill or devoted nursing could do, were of no avail in saving her.

Sister entered the Novitiate on September 8, 1916, and after the usual preparatory courses when was admitted to profession, January 7th, 1919.

Happy in her religious vocation and showing an aptitude for the works of the Institute, she also exhibited a talent for the fine arts – painting, fancy needlework, and music, in all of which she became proficient. Her previous business training and knowledge of French were helpful to her later in the schools, as a teacher of music.

She was a good religious, devoted to her Community, and endowed with noble qualities of mind and heart. Throughout the years in religion, she gave generously of her time in Kingston, Glen Nevis, Gananoque and Picton.