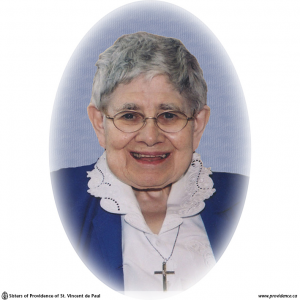 She was born in Montreal on March 29, 1921 to Margaret Helena Sweeney and William McGrath, the second eldest of seven girls and three boys. She grew up in Quebec City and worked for the Federal Government until she joined the Sisters of Providence in Kingston on February 2, 1944 making her first profession in 1946. She ministered to the elderly and did office work in Edmonton and Vancouver from 1947 – 1951. She was then missioned to work in the office at St. Anthony’s Home, Moose Jaw, then Providence Motherhouse, St. Vincent de Paul Hospital, Brockville and Rosary Hall, Edmonton where she was assigned as Superior.

In 1970 Sister was called to work among the poor in Momostenango, Guatemala where she was involved in catechetical work, cooking and sewing classes and parish visiting.

When she returned to Canada in 1975, she worked with girls in a Group Home in Kingston until 1985. During this period she and another Sister were asked to tour the Diocese of Nelson, BC during Lent for the CCODP giving presentations on the missions. In 1985 she went to Pincher Creek, Alberta to assist with retreats and parish ministry. A few years later she returned to Kingston to live and work at Guadeloupe House, a centre for Latin Americans in Kingston.

A deeply spiritual and prayerful woman, Sister Lucy possessed tremendous faith with special devotion to the Blessed Sacrament. She will be remembered for her compassionate care for people and her ready smile.

She is predeceased by her parents, her sisters, Alice, Frances Paquin, Grace Arseneau, Florence Drapeau, Elsie Leclair and Betty Egan and her brothers, James, William and Denis. Sister will be fondly remembered by her sister-in-law, Mary, her many nieces and nephews, friends, and by the members of her religious community.

The Mass of Christian Burial, held in the Chapel of Mary Mother of Compassion, Providence Motherhouse, Kingston, on October 16th, was presided over by Most Reverend Brendan O’Brien, Archbishop of Kingston, accompanied by other members of the clergy. Friar Edward Debono, OFM Conv. delivered the homily.