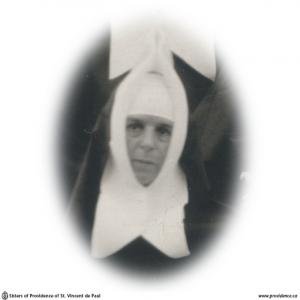 Sister Mary Macrina died suddenly on Thursday, September 17, at St. Vincent de Paul Hospital, Brockville. This is the last fact to be recorded in the almost forty-five years in the Congregation of the Sisters of Providence of St. Vincent de Paul.

She was a daughter of the late Luke Joyce and Margaret Keeley Joyce, born and baptized in the parish of Brewers Mills, but the family moved to the neighbouring district of Railton and it was from this parish of St. Patrick’s that Catherine entered the novitiate of the Sisters of Providence in 1920.

Always a keen student, she had, at very early age decided to follow the teaching profession, and after graduating from Ottawa Teachers’ College launched on a career that was to continue for forty-five years. For a time she taught in the various schools in the Ottawa valley and gave valuable financial assistance to her parents in the upbringing and education of the younger members of the family. But it then became evident to Catherine and to her directors that God was calling her to devote herself and her talents to Him in religious life, and she generously responded to the invitation.

After her profession she was sent first to St. Peter’s School, Trenton, and later to the schools of Arnprior, Belleville, Apple Hill and Lancaster. But she will be best remembered in Kingston where she taught for seventeen years – six in St. Mary’s, ten in St. John’s and one in St. Michael’s.

Sister’s religious life was a wholehearted endeavour to transform herself in Christ and to lead young people to Him. Her ardent love of study and her conscientious fulfillment of duty along with pedagogical skill made her an interesting and efficient teacher. And since she added to these qualifications a quiet subtle sense of humour, it is not surprising that discipline problems rarely developed in her classes.

In her home life in the convent she was generous to a fault, and many Sisters recall the countless little acts of kindness Sister Mary Macrina performed so unobtrusively that none but the Sisters aided were aware of them. She was an upright, loyal member of the Community to the last, eager to serve and even when she knew that she had a serious heart ailment, she was anxious to keep active and render what little assistance she could.

When she retired from teaching in 1959, she was appointed Local Superior of Sacred Heart Convent, Arnprior, but as this office proved too much for her, she was assigned the task of serving the chaplain’s meals in St. Vincent’s.

Her death came at the end suddenly. On September 17th she had dinner and recreation with the Community. Around 3 p.m., a Sister leaving the Chapel noticed her sitting in a small room next the chapel and saw at once that she was ill. The Superior was called and Sister was taken to a room in the hospital but she had scarcely arrived there when she drew her last breath. The chaplain who had been summoned immediately came in a matter of minutes and anointed her.

Sister’s remains were kept one night in St. Vincent’s and the following day were brought to the Mother House. On Saturday, September 19th Solemn Requiem Mass was offered by Monsignor Welsh, in the absence of His Grace. The Archbishop who was in Rome; Monsignor Welsh was assisted by Father Peter McAvoy as deacon of the Mass and Father Leo Byrne as sub-deacon. Father McElligott, S.J., of Regiopolis College, Father Justin Hanley of St. John’s, Father R. Flurey of the Cathedral, and Father John Kroewegen of the House of Providence were present.

Two Sisters survive – Mrs. Frances McConnell and Miss Alice Joyce – both of Kingston, and they with a niece, Marion McDonnell, several nephews and a number of other relatives and friends attended the funeral. Interment was in St. Mary’s Cemetery; Father McAvoy recited the prayers at the grave.