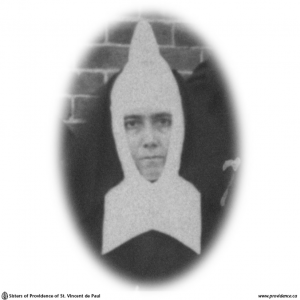 Sister Mary Magdalen (Ellen Clancy) daughter of John Clancy and Ellen O’Donnell was born on Howe Island April 1, 1850. Her mother dying early, the care of the home where her father and brothers resided, devolved upon her. Feeling an attraction to the religious life, she put it away, considering that her first duty now was, to care for her father, who was advancing in years, and her brothers who were yet young.

After the death of her father, the old attraction presented itself. But, how leave my dear brothers alone. No one to do anything for them, it would be cruel.

However, after much prayer and thought, the cause of God triumphed. She took the initial step most painful to nature. She sought for and obtained her entrance into the Novitiate of the House of Providence November 21, 1875. Though at times having a wish or thought to return home, she banished such suggestions as temptations, and going on faithfully, she had the happiness of being clothed with the Holy Habit of Religion on August 7, 1876.

Shortly after, (what is now no longer customary or possible) she was sent on mission to Holyoke, Mass. to assist in the care of the orphans. Here she laboured faithfully for several months, until she was recalled to finish her term of Novitiate. Shortly after her Religious Profession, she was sent back to Mount St. Vincent, Holyoke, Mass. where for many years she had charge of the orphan boys. A spirit of sympathy combined with rare tact and a special aptitude in the management of affairs, created harmonious relations among her young protégés, who, as they developed into manhood, held her name in grateful benediction.

Owing to failing health, Sister was recalled to the Mother House in 1890, and for a few years had charge of the orphan girls, always manifesting the same paternal solicitude for the homeless little ones.

Later on she was appointed to St. Vincent de Paul Hospital, Brockville, where, owing to her gracious hospitality, she made hosts of friends.

She was a devoted Sister of Charity, always exampling in her daily life, the beautiful Virtues of Charity, Sympathy and Self-Sacrifice.

In her declining years spent at the Providence, though not enjoying good health, she was the source of much comfort and edification to her Sisters. She was never idle, and gifted with a cheerful disposition, she was ever able to enliven the recreation by interesting or ridiculous anecdotes or witty remarks.

In her condition many would have given up, and returned to bed months before, but in her ambition, she kept up until a week before her death. When she remained in bed on Easter Eve, it was thought she would not be up again, but on Easter Sunday she was up for Mass and Holy Communion. However, she was glad to return immediately after. She continued to grow weaker each day.

On Thursday she was asked if she would not like to be prepared to receive the Last Sacraments. She answered “No” it is not necessary. However, Reverend Father Corrigan, Rector of the Cathedral was sent for. Then the priest said, “Sister, I have come to anoint you”, she replied, “thanks be to God”. At 4 p.m. the next day Friday, Rev. Father came and brought her Holy Communion. An hour later she seemed to go into her agony. The Sisters assembled, and all that could get near remained in prayer until nine o’clock. The chaplain, Rev. Father Feeney with her niece who was Mother Assistant and a few Sisters remained until the end which came at 1.15 a.m. Saturday April 26, 1930. Like Mother Vincent she took ill on Easter Sunday, and died the following Saturday.

The Superior General, the late Mother Clement, was absent at the time in the West. She was notified by wire, and responded expressing regret and sympathy.

After the Libera, His Excellency delivered a short address, in which he emphasized the necessity of being always prepared for the final summons. It mattered not what one’s position in life might be, but the manner in which one died was of vital importance.

The remains of our dear Sister were then reverently placed beside her Sisters in St. Mary’s Cemetery. Rest in Peace.