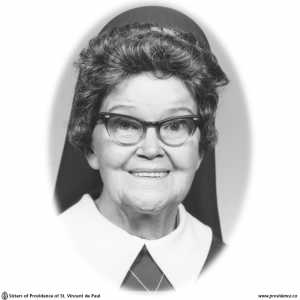 Margaret Mary Power was born the third of a family of 10 to Thomas Power and Mary Kinsella in Clonmel, Tipperary, Ireland on October 19, 1910. Thomas Power found it necessary to move his family to Widnes, Lancanshire, England in 1917. Margaret Mary was 7 at that time. In 1920, years after this move, their gentle loving mother died in childbirth along with her infant daughter.

After the grief of losing his wife subsided, Thomas Power realized that he could not raise 9 children alone; 3 of the young boys were placed in the care of the Sisters of Nazareth, Dittan, England; Margaret Mary and Mary were placed in the care of the same congregation of Sisters at Great Crosby Liverpool; the youngest girl, Kathleen was taken by an aunt in Ireland but died at age 10; the 2 older boys managed on their own but shortly afterward, Edward died at the age of 19.

Margaret Mary lived with the Sisters of Nazareth until she was 17. As their oldest brother, John, had already immigrated to Canada, the Sisters encouraged the girls join him in Montreal. Unfortunately, a week before the girls were to leave for Canada, their father died. It was only because of a delay in processing Margaret Mary’s emigration papers that they were still in England to attend their devoted father’s funeral.

The death of the father weighed heavily upon the girls and within a year Mary was diagnosed as having tuberculosis and was deported to Ireland to live with an aunt.  Margaret Mary found employment with an Irish Canadian Family, the McVeighs. This family was particularly kind to Margaret Mary and treated her as one of its members.

During this time, Margaret Mary was hearing God’s call and thinking of becoming a nun. She sought the advice of Brother Andre and he advised her to “Go to the convent, my child, I can see your soul in your eyes”. She also received guidance and advice from Father Frederick, OFM, who was a close friend and faithful correspondent until he died.

While spending summers in Arnprior with the McVeigh family, Margaret Mary was impressed by the Sisters of Providence and decided to enter the Novitiate in 1932. Mrs. McVeigh made certain that Margaret Mary had everything required for the Postulants entering at that time. In the Novitiate, she felt very alone as most of the girls had relatives close by or in the community but this did not deter her from dancing and singing for her novitiate companions and the professed Sisters as she shared her talents and skills for their enjoyment. She loved to sing Danny Boy with Sister Mary Rosaire and dance the Sailor’s Hornpipe and the Irish Jig.

On August 15, 1934, Margaret Mary made first profession, taking the name of Sister M. Magdalena. After profession she worked at the House of Providence doing night duty, was sacristan at St. Mary’s Cathedral and did proof reading, parceling and painted scrolls, blessing, etc. for weddings, ordinations and various occasions. Her artistic ability was well utilized.

In 1943, Sister was sent to St. Joseph’s Vocational School, Winnipeg, to care for the children from ages 2 to 7 and also had the responsibility of preparing the older children for First Communion, and teaching them to play the instruments for the rhythm band.

In 1947 Sister returned to the Motherhouse where her apostolate of prayer was graciously accepted. She truly had that childlike quality that we are all invited to maintain in our lives. Sister Mary Magdalena kept in close touch with her brothers John and Thomas and her many nieces and nephews. After her nephew Jim Power moved to Kingston, Sister visited the family before Christmas to help them decorate the tree. Jim was touched by Sister’s vow of poverty and was influential in Jim’s life because she was always giving away what she had to someone else.

She had a tremendous sense of humour and her telephone ministry to her many family and friends lightened many tense situations for them. She was a very special person not only to her family but to the many friends she made when in the hospital or visiting a clinic and with some of the staff that worked on Marian II. At the vigil service, Sisters, family and friends paid tribute to Sister’s caring, living kindness, joyfulness, compassion, graciousness and the importance of her apostolate of prayer and keeping in touch with her many friends by telephone on a daily basis.

Sister Mary Magdalena died on August 15, 1994, in the 63rd year of her religious life.  Archbishop Francis J. Spence, accompanied by several priests, presided at the Funeral Liturgy in the Chapel of Mary, Mother of Compassion, Providence Motherhouse and delivered the homily. Her sister-in-law, Mrs. Ellen Power, and many nieces and nephews joined in the celebration of M. Magdalena’s life.