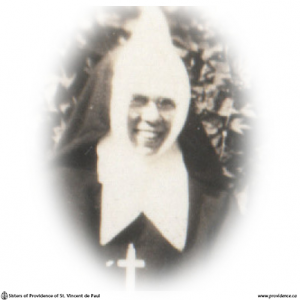 In the summer of 1921 the novitiate at the House of Providence admitted twelve young ladies, eight from Kingston diocese, one from Toronto, one from Alexandria-Cornwall, and two from Edmonton, Alberta. And rather unusual in the story of a group of candidates, all twelve of these young ladies persevered in religious life. All but three lived to observe the Golden Anniversary (50th year) of their religious profession in 1973; the three missing from that celebration had died after 20, 35, and 49 years respectively. On October 14, 1977, God called home a fourth member of that memorable class, Sister Mary Majella.

Sister Mary Majella was born in Toronto, July 1, 1890, one of three children of Edward Kerr, an immigrant from Tyrone, Ireland, and his wife, Bridget Keane from Roscommon. Elizabeth (or Lillian as she came to be called by family and friends) was baptized in Our Lady of Lourdes church on July 23rd. She was educated in the Toronto schools, after matriculation attending Business College, and worked for a few years as a secretary.

After profession in 1923, she was sent to Ottawa Teachers’ College, and commenced a life of dedicated service in the classroom. Her particular talent was in the formation of very young children and most of her thirty-five years of teaching were spent in primary grades. In his homily at her funeral, Monsignor J. G. Hanley remarked that he believed the work of a primary teacher called for a special vocation.

Sister spent short terms in the schools of Brockville, Perth and Prescott, and nine years in St. Mary’s, Kingston. But she was best known in St. Peter’s, Trenton, where she taught for twenty years. After joining the ranks of superannuated teachers, she remained four years in St. Peter’s Convent and acted as secretary for the Superior until she was obliged by ill health to retire to the Infirmary at Heathfield in 1967.

Although she laboured for so many years, Sister Mary Majella endured much suffering. She was afflicted by frequent headaches, and underwent three severe bouts of illness, each brought her to death’s door.

During her ten years in the infirmary her memory gradually declined, but she was able to be around and to spend many hours in the infirmary oratory, and assist at Mass in the gallery of the main chapel. In fact for the last year or so, the two questions she asked everyone she met were: “Is there another Mass” and “Where and when?”

About the middle of July, 1977 she suffered a heavy stroke and was admitted to Hotel Dieu Hospital. Doctors thought nothing could be done for her, and that she could not live long. For a week Sisters remained with her day and night, expecting any moment would be her last. But she rallied slightly, although never regaining full consciousness, and was discharged to the infirmary. She was kept as comfortable as was possible by intravenous and assiduous attention on the part of the nurses until October 14th. A long agony of three months! But we hope she was not sensible of pain. As she died just after midnight on Friday morning, and had no relatives (her sister and brother had been dead for many years) it was thought best to have her funeral on Saturday, October 15th.

The Archbishop being absent, Monsignor Hanley, Vicar General, offered the Mass, gave the homily and accompanied the remains to the cemetery for the prayers at the grave. Two of her Novitiate class, Sisters Mary Cletus and Clarissa, were honorary pallbearers, along with Sisters M. Carthagh and Electa.

Sister Mary Majella will be remembered for her efficiency as a primary teacher, especially in preparing the little ones for the sacraments of the Blessed Eucharist and Reconciliation. This, her work of predilection, was the sequel to her own deep devotion to the Mass and the Eucharistic Presence on the altar of her Divine Spouse!