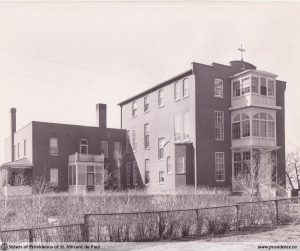 Sister Mary Marcella died at the House of Providence, Tuesday morning, May 12, 1953, after a lingering illness. Born in Vinton, Quebec, she was of Irish descent. She entered the House of Providence Novitiate, Kingston, August 13, 1907, made profession two years later, and pronounced final vows, August 29, 1911. She was then sent to Brockville, and spent nine years at St. Vincent de Paul Hospital in charge of the kitchen and diets. In 1920, Sister was appointed to Providence Hospital, Daysland, Alta, where she spent the next twenty-three years, happily engaged in similar duties. Returning to Kingston in k1943, she continued to aid in the wards at the House of Providence, until her health failed a few years before her death.

Sister M. Marcella was endowed with a deep spirit of faith and piety. Always solicitous for the needs of others, especially the poor, she was forever thinking up ways and means of contributing to their wants – spiritual as well as temporal, and in her contacts in Daysland she had ample scope for the exercise of her zeal and charity. It may be said of her, that she was a true daughter of St. Vincent, “zealous for the better things.”

Archbishop O’Sullivan celebrated Pontifical Requiem Mass in Our Mother of Sorrows Chapel on Friday. He was assisted by the Cathedral clergy. Interment took place in St. Mary’s Cemetery. Father Ainslie said the prayers at the grave, assisted by Father Hogan, pastor of Vinton.

Sister had spent over forty-five years in religion.