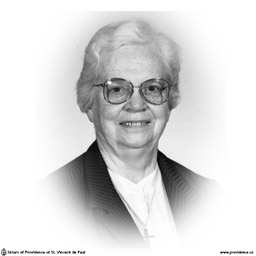 Mary Irene Angela Goodwin was born in Toronto on May 12th, 1914 to Augustus Goodwin and Anastasia Riordan. When she was two years old, her mother died and a few months later her younger sister died of whooping cough. Her father was in a dilemma as to what to do with a two year old child. So he asked his two maiden aunts, Ella and Theresa McAvoy, if they would consider taking Mary Irene. These two aunts had already taken care of Mary Irene’s father and his sister, Clare, as their mother had died at a young age. So Mary Irene traveled with her father to Picton where she took up residence with her aunts until she was twelve years of age. While in Picton she attended St. Gregory’s School and Picton Collegiate. In December 1926 her Aunt Ella died and soon after her Aunt Clare returned from California where she had been living for ten years. She thought it would be best for them to move to Toronto. So Mary Irene completed her high school at St. Joseph’s High School.

Mary Irene wanted very much to have a university education but her Aunt Clare was not in a position to make that possible. So she took a year’s course at one of the Shaw Business Colleges. Following her graduation she had several temporary jobs then she obtained a position with the firm of Mara & McCarthy Investment Brokers. She remained with this firm until she entered the Novitiate of the Sisters of Providence of St. Vincent de Paul on September 15, 1938.

Sister Mary Marcia’s first mission was to St. Joseph’s Hospital, Edmonton where she did secretarial and accounting work. After three years she went to St. Joseph’s Vocational School and Day Nursery in Winnipeg where for nine years she worked as secretary. Then she was appointed Superior which lasted for two terms of six years. She then spent two years at Rosary Hall in Toronto as Superior. Following this assignment she was appointed Superior of St. Mary’s Hospital in Montreal for six years. She worked part time in administration during this time. In 1972 she was assigned to the Motherhouse where she did secretarial work for the next seven years before she returned to St. Joseph’s Vocational School in Winnipeg for another term of six years as Superior.

In a letter written by His Eminence George B. Cardinal Flahiff, Archbishop of Winnipeg in May 1977, he stated, “Sister Marcia has rendered outstanding service to the Church in different parts of Canada. Her years and her complete dedication to the interests of God’s people in the Archdiocese of Winnipeg are well remembered and highly appreciated by all who knew her here, especially by myself.”

In 1986 Sister Mary Marcia returned to the Motherhouse to again do secretarial work, but with failing eye sight her ministry was curtailed. About six years ago Sister suffered a stroke and from that time she was confined to the infirmary where she bore her suffering with much patience. Sister Mary Marcia would have celebrated her 70th Jubilee this year.

Sister will be remembered for her great hospitality and her wonderful smile. She formed many lasting friendships among of the boys from St. Joseph’s in Winnipeg, some of whom often visited her.

The Mass of Christian Burial, held in the Chapel of Mary, Mother of Compassion, Providence Motherhouse on May 21, was presided over by Most Reverend Brendan O’Brien accompanied by other members of the clergy. Reverend Leo Byrne, a friend of Sister M. Marcia, was the homilist.