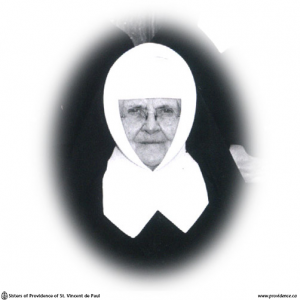 Sister Mary Margaret died on Sunday afternoon, November 12, 1961, at the Marian Infirmary, Providence Mother House, “Heathfield” after an illness of more than two years. The former Miss Annie Masterson was born in Chesterville, Ont., daughter of the late John Masterson and his wife Mary McPhail. She entered the Novitiate, then located at the House of Providence, on March 22, 1905.

After profession in 1907, Sister M. Margaret continued a work for which she seemed specially endowed by Providence, hospitaller of the sick wards, the aged poor and infirm. In this capacity Sister M. Margaret served her Community in Kingston, at the House of Providence and St. Mary’s of the Lake; Brockville, Smiths Falls, and Edmonton hospitals, until failing health obliged her to retire from active duty. In 1954, she came to the Mother House, and was one of the first occupants of the new Marian Infirmary wing. In 1957 Sister suffered a stroke which left her bedridden until her death.

Naturally of a kind and forbearing disposition these virtues were most noticeable in her contacts with the aged poor in her charge. During her own illness over a long period in the infirmary, she proved the truth of her virtuous living by her uncomplaining patience and cheerfulness, which endeared her to the Sisters taking care of her and was a source of edification to all.

Sister M. Margaret celebrated the golden jubilee of her religious profession in 1957.  She belonged to a family who gave many members to the church, including a sister, Sister M. Florentina who survives and the following cousins: Sister M. Ignatius and Sister M. Fergus of this Community, Rev. John McPhail of Alexandria, Rev. J.F. Masterson, S.J., Rev. Fathers John and Robert Masterson of the Dominican Order.