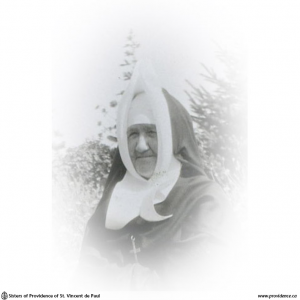 What gratitude we owe thee, O God! We whom you have called out of a wicked world into a home of Your own, to be protected, cared for, all our wants supplied, and when the time comes for our departure from this world, to be tenderly prepared and strengthened for our journey to Eternity. O what a great favour! We can never be sufficiently grateful for our Holy Vocation.

The subject of our sketch, Mary Ann Sheehan, the daughter of Patrick Sheehan and Mary Ann Buckley, was born in Springfield, Mass. It may be asked, “How did it come that she drifted so far from the place of her birth? Not knowing particularly, we shall answer: “The Providence of God that cares for all things directed that she come this way, and was received into our Community.”

She entered our Novitiate on November 11, 1908, received the Holy Habit on April 24, 1909, and made Holy Profession May 3, 1910. She laboured for some years in the different offices of the house, in the kitchen, wards and laundry, also spent some time in St. Vincent de Paul Hospital, always showing a cheerful, generous spirit.

On January 8, 1919, she was sent west to Providence Hospital, Moose Jaw. Here she was given charge of the laundry. So faithful was she in the execution of her work, and so well did she manage this office, that she was never changed, happy and contented in it.

It was her great desire to labour until the end of her life, however, this was not granted her. She had to remain inactive for nearly a year. She suffered greatly during this time, but never became altogether helpless, in fact was able to get out of bed and wait on herself to the last day.

For particulars of the closing of her life, we shall copy from a letter received from her Superior after her death:

“It will be a consolation for you to know that Sister Mary Martha was in a very peaceful state of mind. The past, present or future did not trouble her in the least. Her desire and prayer was for Contrition more contrition. Her trust and confidence in God was very great, hence, she did not fear death, on the contrary, welcomed it. She would say, “Why should I fear to go to God?  Have I not been working for Him for the past thirty-three years? I will just say to Our Dear Lord, Here I am, Sister Mary Martha, please take me”.

Her passing was very quiet and peaceful. The Angel of Death came while she slept, having gone to sleep Friday night she wakened in the other world at 2.30 in the morning, Saturday, August 27, 1932. Five of the Sisters were with her assisting by their prayers. Her confessor said he had no doubt but that Sister was in Heaven.

After the remains were placed in the coffin, they were brought to the Community room, where they rested until Monday morning, the Sisters taking turns watching and praying beside her night and day, as is done at the Mother House.

The pall-bearers were the four Senior Sisters and six Knights of Columbus. The Sisters of the other Communities were present.

Naturally very lonely, we are grateful to God for His great goodness to our Sister and to us. May she rest in peace.

Mary Sheehan entered the congregation as a Tertiary Sister in 1900 and was known as Sr. Martha. Tertiaries were auxiliaries who performed domestic labour and were part of the Congregation from 1895 to 1907, when the program was phased out and they were invited to enter the novitiate. She entered the Novitiate on November 11, 1908.