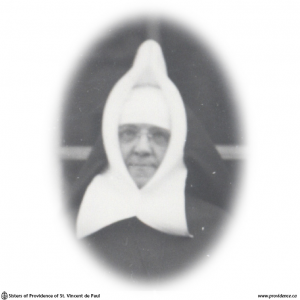 Mary Coyne was born on June 17, 1890 at Widnes, a suburb of Liverpool, England. Her father, Thomas Coyne, a mechanic, and her mother Mary Burke Coyne were Irish. In 1911 the family of four – parents, Mary and a brother – came to Canada and resided for four years in Nelson, B.C. Here Mary completed her high school education with the Sisters of St. Joseph, graduating from the commercial department.

In 1915 the Coyne’s came to Montreal where Mary worked for a year and came under the spiritual care of Reverend Father Cotter, S.J. This holy Jesuit directed a number of English-speaking girls of Montreal to our community. So on January 6, 1916 Mary entered the Novitiate at the House of Providence.

After making Profession as Sister Mary Martin she served in various Ontario Houses until 1928 when she was assigned to Alberta. Here she spent 26 years, twenty of those years in St. Joseph’s Hospital, Edmonton, in charge of the business office.

In 1948 at the request of the Redemptorist Fathers in Athabasca, 100 miles north of Edmonton, the community opened a residence for girls from the surrounding area who were attending high school in the town. The diocese of St. Paul had just been established with Rev. Maurice Baudoux as first Bishop, and he was determined to give special care to the education – religious and secular – of the younger members of his flock. Sister M. Martin was appointed superior of the Rosary Academy, as the residence was called. For four years Sister and two companions helped in this religious endeavour during the school year and by catechetical summer vacation schools, when numbers of children were looked after by the sisters while they followed courses of preparation for the sacraments.

After four years the Sisters found that because a program of bringing students by bus from rural areas had been established by the Education Department, there was no longer a need for Rosary Academy. At this time the town had built a new hospital and they offered the old hospital to the Sisters to serve as a home for the aged. Sister M. Martin was pleased to undertake this work of charity and she and her two companions soon had some twenty old and infirm persons settled in St. Vincent de Paul Home.

Along with her care of the aged, Sister was zealous in efforts to help promote religious vocations and at least one Sister of Providence (Sr. Yvonne Patry) and one priest (Father W. Farrell) are grateful to her for her prayers and encouragement.

When her term of office expired in 1954 she spent two years in Holy Family Hospital, Vancouver, and was then assigned to Father Dowd Memorial Home in Montreal, where she was to remain for eight years. She was, in the words of different Superiors of that mission, an excellent floor supervisor, kind to the poor and sick, faithful observer of her religious duties in spite of failing health, with lots of good sense and humour.

In 1964 a series of heart attacks compelled her to retire to the infirmary at the Mother House, where her last ten years were happy and fruitful ones. She spent many hours in prayer before the Blessed Sacrament in reciting the Rosary with the bedridden and dying sisters. These years also had many moments of loneliness and frustration as her hearing and sight became increasingly impaired and was not helped by a hearing aid and cataract operations. She could not do her spiritual reading herself, nor hear anyone reading to her.

Still Sister did not lose her cheerful spirit or her interest in her fellow-patients. On the evening of her death, June 4th, she visited one of the sisters and seemed as well as usual. About 9 p.m. she complained of a pain in her chest. Sister Margaret Rose called the doctor and her prescribed. Sister checked her at 10 p.m., and then at 2:30 p.m. the night sister found Sister M. Martin in distress and called Sister Margaret Rose. Sister called Father Buckley, chaplain, and Sister Grace Maguire, Assistant, (Our Mother General was away. Father Buckley came at once and anointed Sister and the sisters remained praying with her until she quietly breathed her last at 4 o’clock. The community Mass at 7 a.m. was offered for the repose of her soul. Her beautiful death was a fitting close to a life of prayer and charity. Her funeral Mass was offered on the First Friday, June 7, by His Grace assisted by Fathers Buckley and Hibbard, with Monsignor Walsh of St. Joseph’s parish present. The day was bright and sunny and so many sisters were able to accompany her remains to the cemetery.

There were no surviving relatives. Her only brother and his wife died a few years ago and they had no family.