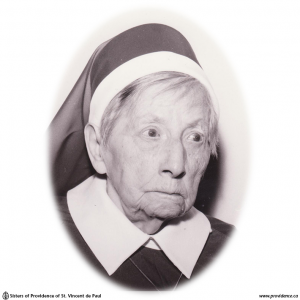 Sister Mary Matilda (Marshall) was buried on the feast of St. Lawrence, a famous deacon/martyr of the early church. In retrospect this seemed very fitting, for it was discovered after her death that she had in her own quiet way given a special assistance and support to priests. This special apostolate of Sister’s came to light, when, in the archival search a large number of ordination souvenir cards, jubilee cards, memorial cards, etc., from priests, bishops and popes were found in her devotional books. The explanation was uncovered in this handwritten dedication:

“Oh, Holy Mother of God, I offer through your Immaculate hands, all my works for God’s priests. Help me to keep this resolution always in mind. All for God’s glory.”

The works which Sister Mary Matilda had to offer as a religious were simple and humble ones – domestic duties, such as cooking, sewing and looking after the laundry. The desire she expressed in her request to make her vows was “to go wherever (she) might be appointed, to do whatever might be required of (her)”. “With God’s help, she wrote, “I can do whatever you wish.”

Julia Marshall was born on March 3, 1891, at Ompah, Ontario, on a farm “a mile or so off the beaten track”. She was the oldest child of Emma Jane Jarbeau and Peter Marshall. Three boys and three girls were added to the family after Julia, but sadly their good mother then died in childbirth, together with the twins that she was carrying. She was only thirty-six.

Since Julia was the last surviving member of her family and had not herself left any account of her younger years, little is known of her life before she entered the convent. She came to the House of Providence, Kingston, on October 12, 1909. She and her Novitiate companion, Sister Mary Clotilda (Brady) spent their novitiate at the newly opened St. Mary’s of the Lake. Juniorate was only two years long in those days, so by November of 1913, she was writing to ask permission for final vows. Her letter bears the heading of St. Francis Hospital, Smiths Falls, for she was working there in the laundry that year.

After final profession, Sister Mary Matilda spent over twenty years in the west. From Daysland, Edmonton and Camrose came stories of her kindness and cheerfulness. She “made everyone she came in contact with feel at ease”. In Camrose, for example, she was in charge of housekeeping, but often helped out in the laundry. There, on one particular day, she discovered a young nurse in tears. The R.N. exams were the next day and the girl needed time to study. Sister Mary Matilda promptly sent her off to her books while she, herself, took over that washing. Many years later, in a Christmas letter to another Sister, this nurse revealed the kind deed that she still remembered.

At Rosary Hall in Edmonton, Sister was dearly loved by the residents for she never scolded or found fault and, when necessary, did some little chore herself rather than have a girl distressed. Despite her duties at the hall, Sister was able to find time to visit the sick in their homes and bring a smile to all she met.

From 1937 to 1943 Sister Mary Matilda was stationed in and around Kingston and in 1949 she was posted for a second time to the costume department at the Motherhouse. Although her first stay had been only a short one, this second time she was to remain for forty-five years, so that at the time of her death in 1988, she had been there longer than anyone else in residence. Many Sisters will remember her being on duty, in the black sewing room in her active years. She was ready to give pleasant attention to each Sister’s needs. At noon and evening recreation she could usually be seen adding a few more stitches to a guimpe or veil, certain to have it ready on time.

Along with her work, Sister Mary Matilda had years of suffering to offer for her beloved priests. High blood pressure put her on the sick list in 1965 and in 1969 she was diagnosed as diabetic. In her very senior years, Sister was afflicted with the blindness that sometimes develops with diabetes. Despite good nursing care in the Marian Infirmary, mental confusion, arteriosclerosis and pneumonia plagued her during her last twenty years. However, as Archbishop F.J. Spence said in the homily at her funeral, Sister “lived ready for the journey of death,” and so when her time here came to an end, she passed away quietly and without struggle. Father Brendan Meganety, O.M.I., who was called in to anoint her testified that she was repeatedly heard to pray, “Oh, thank You, God, for everything.” The Great High Priest, Jesus Christ, presented her to His Father in the late afternoon of August 8, 1988.

Several nieces and nephews with their children were present at Sister Mary Matilda’s funeral, evidence of the love and respect with which she was held by succeeding generations of her family. The Mass was concelebrated by Archbishop Spence, Father J. Rozon, Father D. Clement, Father D. Ryan and Father W. Steacy, CSsR.

In all, Sister, gave almost seventy-nine years to religious life. Not one speck of her humble, dedicated work, her patient suffering or her gentle spirit has gone unnoticed by God. She shall have the reward of her faithful ministry when she sees the full glory of the priesthood of Christ and shares in it with those for whom she offered her days on earth.