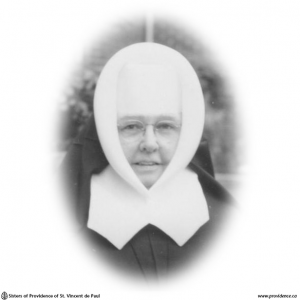 Sister Mary Matthew, daughter of William Kelly and Catherine Ellen Farrell, was born in the town of Brockville and received her elementary education there. After high school at the Convent of Notre Dame, Kingston, she entered the Novitiate at the House of Providence on September 17, 1911.

She made profession in 1913, and went to Maryvale Abbey, Glen Nevis, to complete high school requirements for admission to teachers’ college, being one of the first of many young Sisters to study at the Abbey. After graduation from Ontario Teachers’ College she taught in the elementary grades of Trenton, St. Mary’s, Kingston, Tweed and Smiths Falls. In 1930 when St. Michael’s High School was established, she was appointed to the staff in charge of science and mathematics. Except for four years at Maryvale Abbey High School, Glen Nevis, she spent the remaining thirty-five years of her life in Belleville. During these years she attended summer school at Queen’s University and obtained her B.A. degree. In 1960 Nicholson College replaced the old St. Michael’s High School and Sister M. Matthew had the pleasure of fitting up and enjoying for a few years a modern, well-equipped science lab. Endowed with more than ordinary talent in art, Sister took special training in painting, and devoted much of her spare time to this hobby.

For a number of years she suffered form arthritis which was gradually becoming more severe, and it must have cost her considerable pain to keep at her post day after day. Yet her interest in her classes and especially in her students kept her morale high and made her able to overcome physical discomfort.

In April 1965, she was ordered to St. Vincent de Paul Hospital, Brockville, for treatment. Her condition was found very grave and she lived only two months. She died on June nineteenth.

Her funeral Mass was celebrated at the Mother House, “Heathfield” June 22 by Reverend Father Moriarty, S.J. of Regiopolis.

Surviving relatives are a sister, Sister M. Antoinette and a niece, Sister Mary Regina, both members of Providence Community; a brother, Bernard Kelly of Sudbury. A brother, Farrell Kelly died in 1957 in Syracuse, New York.

A few excerpts from tributes paid to her give some idea of the influence Sister M. Matthew exerted on the students of Belleville for three and a half decades.

From Francis Buckley, an ex-pupil, now Head of English Department in Belleville Collegiate and Vocational Institute: “Her life has spanned the allotted three score and ten, has teemed students she was trusted guide and a teacher with a thorough command of her subject; to parents and grandparents of our students she was a link with the Sisters of St. Michael’s, where she had been stationed for a period of more than thirty years.

Sister Mary Matthew was born in Brockville, a pretty St. Lawrence town for which she always retained a deep affection. Though she entered the Novitiate as a very young girl, her ties with home and family were strong. The same simplicity which caused her to take pleasure in the little incidents that mark our daily lives or in some small token of affection from a former pupil led Sister to speak easily and naturally to the students about her parents and family. Senior chemistry classes studying alkaline were left with a vivid picture of Sister’s father “slaking lime in the backyard”, and of the various uses in that old Brockville home. Sister’s classes were characterized by originality of treatment and consequent interest. In them students learned their physics and chemistry – and a great deal besides.

The good that Sister did in Belleville in a quiet way only God knows – and the students, many of them long out of school, whom she helped. When able to do so, she visited the sick, the aged, and the bereaved. She kept in touch with former students who, she thought, needed a little spiritual prodding, even though providing this was often time-consuming and wearing. Her teaching of religion was very practical; the scriptures were Sister’s favourite textbook. They were also her own meditation book.

Coming when it did, Sister’s death passed almost unnoticed in the surroundings where for so long she had tried to do God’s work, often without encouragement, almost always without recognition.  In the school there has been established in her honor the “Sister Mary Matthew” prize for science and the trophy for public speaking. There, we hope, will be mute reminders in years to come of a Sister to whom Nicholson Catholic College is deeply indebted.”