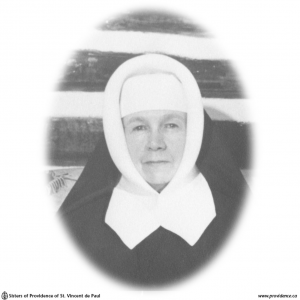 Sister Mary Matthia (Mary Monica Kavanagh) died at Hotel Dieu Hospital on November 8, 1966 after an illness of two months. Sister was born at Vinton, Quebec, in the diocese of Pembroke, one of eight children of Edward Kavanagh and Ellen Ferrigan Kavanagh.

On August 13, 1925, she entered the novitiate of the Sisters of Providence, where an elder sister had been professed in 1916 as Sister Mary Priscilla.

Sister M. Matthia spent several years of her religious life on the western mission – Providence Hospital, Moose Jaw, St. Mary’s Home, Edmonton, and St. Vincent de Paul Home, Athabasca. For a brief term she had charge of the office at Rosary Hall, Toronto.  Her work of predilection, however, was with aged residents at the House of Providence, Kingston. She served here in different capacities – as dietitian, as sacristan, and as Assistant to the Superior. When the new and enlarged House of Providence was opened in 1961, she set up the occupational therapy department for the women, and managed it successfully for five years. She was able here to help in restoring and maintaining some measure of physical health for the aged and infirm and in bringing interest and happiness into the hearts of many suffering from loneliness for home and loved ones.

She was in her usual good health preparing for the annual sale of products of her department when she was suddenly stricken with illness and admitted to hospital. The diagnosis was cancer so far advanced that treatment would be of no avail. The remaining two months of her life were a period of suffering in spit of untiring efforts of nurse to give her some relief. On Sunday, the sixth, our Mother General and Mother Assistant visited her and found that she was considerably weaker than on their previous visit, the week before. On the morning of November 7th, it was noticed that she was failing rapidly. Mother Mary Jean, Superior and several Sisters of the House of Providence, and Mother Mary Modesta, Assistant at Heathfield spent time with her during the day. In the afternoon she received for the second time the Sacrament of the Sick.

In the early morning of the eighth, she quietly breathed her last. The message reached the Mother House at 6:30 and at 7 o’clock, scarcely an hour after her death, the Community Mass was offered for the repose of her soul.

The remains were taken from the undertaker’s to the House of Providence and during the afternoon and evening continuous prayer was offered for her. The residents who loved her, the Women’s Auxiliary who had helped her to establish her department, and the Legion of Mary in whose apostolate she was most interested, joined the Sisters in their supplications on her behalf.

On Wednesday afternoon, the ninth, the remains were brought to the Motherhouse, and on the tenth in the Chapel of the Immaculate Conception the funeral Mass was offered by her nephew, Reverent F. J. Kavanagh, O.M.I., of St. Patrick’s College, Ottawa, assisted by Father R.J. Flurey and Father Groenewegan. His Grace, Archbishop O’Sullivan, presided at the throne and chanted the Libera. He was attended by Monsignor Walsh and Lynett of the Cathedral staff.