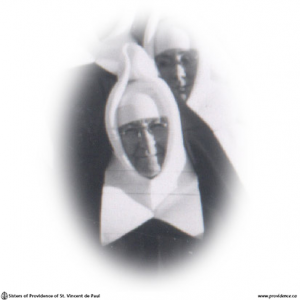 After a long and fervent religious life, Sister Mary Maurice died at the Marian Infirmary of the Motherhouse on August 15, 1969.

Mary Ellen Maloney was born at Marmora on October 21, 1878, a daughter of Michael Maloney and Mary Shannon, who, according to Father Murtagh, pastor, founded one of the best families in the parish. Mary Ellen entered the Novitiate of the Sisters of Providence of St. Vincent de Paul on December 8, 1909, and after making profession as Sister Mary Maurice was sent to St. Vincent de Paul Hospital, Brockville to train as a nurse. She received her training under Sister Mary Eulalia, the first Sister to be in charge of the school; and Sister Mary Maurice’s success as a nurse was no doubt due partly to the efficiency of her director.

Sister carried on her apostolate in St. Vincent’s for nine years, and the remainder of her nursing career was spent in the West. She was eight years in Daysland, Alberta, acting as Local Superior for one term. She was the first Superior of the Children’s Shelter – later to become St. Joseph’s Vocational School – in Winnipeg, and returned there on two later occasions, spending altogether fifteen years on that mission.

During the 1918 flu epidemic she was seriously ill and never regained her former excellent health, although she continued strenuous duty until 1948. That year she came to the Motherhouse, “Heathfield”, where for ten years she gave valuable assistance to the Sisters in the vestment department, before being obliged to retire to the Infirmary.

She gradually became weaker physically and mentally, until in March 1969, she had to be taken to Hotel Dieu for surgery. She never regained complete consciousness although she lingered on for two months. On August 15, at 7:40 p.m., after the activities of Profession Day had ended, she quietly breathed her last. On Our Lady’s feast day, December 8, she came to the convent to offer her life to God, and sixty years later, on another feast of Our Lady, God accepted her final surrender. Her lovely Mother, whose name she bore, guided her throughout her life.

His Grace Archbishop Wilhelm concelebrated the funeral Mass with Sister’s cousin, Father M.J. Nealon of St. Brigid’s Parish, Toronto. A niece, Mrs. John Savage of Kingston, and several relatives from the Marmora district, including a niece, Sister attended the funeral.

Sister Mary Maurice was, according to all reports from her Sister companions, a general favorite, because of her cheerful, kindly manner and quiet humour. In the files at the Motherhouse is a letter of recommendation sent by Father Murthagh when Sister applied for admission to the Novitiate. Her life verified the promise her pastor made of her. “I consider she will make an exceptionally good subject for your house as a Sister of Charity. She has piety, a spirit of obedience and especially a good level head.”