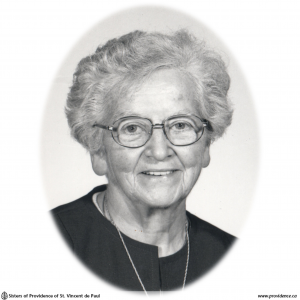 Thomas Coligan and Margaret Daley were the parents of eleven healthy children who were nurtured and cared for with love and concern in a non-affluent, but comfortable, home at Morrisburg, Ontario. Evelyn, born on August 27, 1912, was the youngest of three girls, with five older and three young brothers.

Coming from a large family, they learned to share and help with family duties at an early age. Evelyn’s Grandmother Daley lived with the family and assisted Mrs. Coligan with the children and the home, while Mr. Coligan went to work each day. On Sundays and Holy Days the family relaxed after Mass and enjoyed each other’s company in simple recreational activities and were often joined by friends.

While Evelyn was attending the Collegiate Institute, her father made sure that she took the required subjects for Senior Matriculation and, just in case she might have too many so called “spares”, the gaps in her timetable were filled by taking courses offered in Business Practices, which included typing, shorthand and accounting methods.

While attending Grade XIII, Evelyn began to think of a future career and chose nursing. Her choice did not please her mother too well as she had an idea that nursing was not quite as worthy a work as teaching. Evelyn was accepted in the School of Nursing at St. Vincent de Paul Hospital, Brockville, which was her first contact with the Sisters of Providence. During her first year of “nurse training”, other nurses were planning on becoming Sisters, but she was inclined to think of that as a rather strange and ridiculous step. As time passed, however, many circumstances seemed to point in that direction. The Superintendent of Nurses, as well as her former parish priest in Morrisburg, believed that she had a religious vocation and placed retreat opportunities and frequent vocation counseling in her path.

At the end of a year and a half in the School of Nursing, Evelyn entered the Sisters of Providence on October 14, 1932. Her call to the religious life was a very gradual and increasing awareness that the Sisterhood was the life Jesus had chosen for her. On March 19, 1934, Evelyn made her first profession of vows, taking the name of Sister Mary Melanie, and returned to Brockville to complete her nurse training, which was the beginning of a long career in the nursing field.

After graduation, Sister Melanie was assigned to Moose Jaw, Sask., where she worked as a Supervisor in the Operating Room; she then went to St. Francis General Hospital, Smiths Fall, Ont., as Supervisor of Obstetrical Nursing. In 1943 Sister obtained her Bachelor’s Degree in Nursing Education at the Ottawa University and was then assigned to the School of Nursing, St. Mary’s Hospital, Montreal. While teaching, she was also named Superior of the Sisters. During this time, she attended summer school at Catholic University in Washington, D.C., and obtained her Masters Degree in Nursing Education.

Being interested in Hospital Administration, she obtained her certificate in Hospital Organization and Management through the extension course organized and taught under the sponsorship of the Canadian Hospital Association with the cooperation of the Universities of Toronto and London (Ontario) where she spent two summers of required educational activities.

In 1958, Sister Melanie was asked by the president of St. Mary’s Hospital Corporation and Chairman of the Board to replace the Hospital Administrator. This temporary assignment soon became a permanent position and Sister retained the position of Chief Executive Officer for 20 years, a work which she found most fulfilling. On leaving St. Mary’s Hospital, Sister Melanie was elected a Life Member of the Canadian Council of Health Service Executives and a Lifetime Fellow of the American College of Hospital Administrators.

When Sister retired in 1977 as Chief Executive Officer of St. Mary’s in Montreal, she was elected to the General Council of the Congregation and served eight years as General Councillor. She was a member of the District Health Council, Kingston, and a member of the governing boards of St. Mary’s of the Lake Hospital and Providence Manor in Kingston, as well as St. Vincent de Paul Hospital in Brockville.

Sister Melanie considered herself as having been blessed throughout her life and always enjoyed the work which she was missioned to do, and had a true appreciation of the many great Sisters in our Congregation who were supportive and prayerful women as well as caring friends.

During the last few months of her life, Sister Melanie was confined to the Infirmary and after a lengthy illness, born with great equanimity; she died on October 14, 1991, in the 60th year of her religious life. Monsignor T.J. Raby, assisted by many priests, presided at the Funeral Mass in the Chapel of the Immaculate Conception, Heathfield. Father Leo Byrne, at Sister Melanie’s request, delivered the homily. Nephews of the deceased were pallbearers and two nieces gave the readings. Many, many relatives and friends were present at the funeral.